Spoilers: A life-changing experience it was not, but it was interesting and worth it for other reasons.

I guess I need to start this article by telling you what Precure is exactly.
So, Precure is a Japanese anime that celebrates its 15th birthday this year and that’s extremely popular in Japan among a very specific demographic group.
The term Precure is a portmanteau word formed by combining Pretty and Cure (sometimes, you can see Pretty Cure instead of Precure in some merchandising materials). And in Japanese, it’s pronounced [Pulikyua], even though I always say [Pelicula] and I usually get away with it.

So, Precure is a Japanese anime of the “magical girls” genre (you know, like Sailor Moon, probably the most famous one outside of Japan). The protagonists always are female as well as some sort of superheroes. They’re somewhat regular girls (usually teenage girls) that magically change into super-powered heroes under certain circumstances and with the aid of certain accessories.

Its target audience is very young, mostly girls between the ages of 4 to 8 or 9. And because its audience is unlikely to watch the show for longer than 4 or 5 years, also and probably mostly to sell more overpriced toys (remember that most TV anime in Japan are produced by toy companies), the show is “anthologized”; that is, every year, for every new season, the characters, stories, and settings change.

This past Sunday, Kira Kira Precure À La Mode ended, and I happened to have watched most of the episodes of the season with my daughter, every Sunday morning while eating breakfast. A season lasts a year, with more than 45 episodes.

But, let’s go back in time, about one year ago. At the time the Maho Girls Precure series was ending. My daughter, of course, watched it, but I never paid close attention to it. Usually doing e-mail or something similar nearby while she was in front of the TV. However, when the new series was announced, my curiosity was picked.

First, the title contained some French (however, it is used in its English meaning here). The theme was pastries and cakes, and I admit that was intriguing/amusing: Superheroes who also were pastry chefs! I liked the idea. And finally, once turned into their magical selves, the characters had a very “furry appearance”, complete with ears and tails: rabbit for the main character – of course rabbit for the main character (as rabbits are the favorite animal of every little Japanese girl), squirrel, lion, cat and dog for the four other ones (joined by a Pegasus later in the season). Their code names are also quite interesting as we have Cure Whip, Cure Custard, Cure Gelato, Cure Macaron and Cure Chocolat.

So, magical girls, pastries, a variety of mostly cute animals…

And could one cast the net wider? Of course, one could!

Two of the characters were older than the usual age (18 instead of 14), and one of them in particular – Yukari/Macaron – seemed especially designed to attract otaku/no life male adults: she was mysterious, sexy and voiced by Saki Fujita, a singer and voice actress who has a strong following among that demographics, especially since she voiced the famous “virtual singer” Hatsune Miku (thank you google for this information, I would have no idea about who these people are otherwise).
The other older character, Akira/Chocolat, appears to be male at first – and indeed Ichika/Whip, the main protagonist, thinks that she is when they first meet. It would have been a first in the show’s history. Actually, she turns out to be a very tomboy female and a lesbian. Also a first. More on that later…

All in all, the episodes are very formulaic and every week a usually peaceful situation (involving pastries) is troubled by a monster or a villain. As a consequence, the Precures will unite to defeat the enemy, and everything will return to normal and end with some delicious cakes and sweets.

If there is a lesson to be learned from all of this, it’s that evil can be defeated thanks to the powers of friendship, a pure heart, helping each other and the love of pastries and cakes.

In a sense, it’s not really different from many anime. It even reminded me of Goldorak in many ways. Goldorak (known as Grendizer in English I believe) being one of the very first anime to be broadcast on French television in the 1970s and that no boy alive in the country back then would miss for any reason, myself included.

So yeah, nothing too out of the ordinary, yet some pretty positive messages to teach little 5 year-olds.

Two episodes/storylines stuck out from the rest in my opinion.

There’s one episode where a prince charming kind of guy (literally a prince) arrives in town, seduces Yukari and proposes to her. First, it was surprising because there is little to no romance in the show (remember, even if the protagonists are teenagers, the target audience is little girls), but even more surprising was the fact that something that was barely implied until then came out in the open. Yes, Akira is a lesbian, and yes she’s in love with Yukari! And of course, she’s very jealous of Prince Charming.
I can’t really remember the rest of the episode. It’s not that important. Probably Prince Charming goes away, and everything returns to normal. 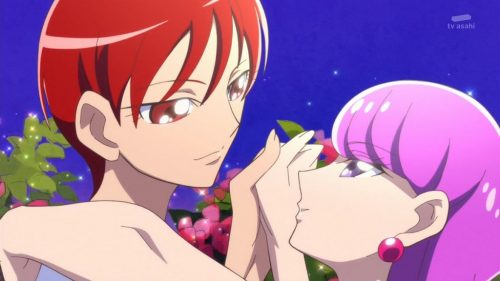 That episode struck me for two reasons.

1. It introduced homosexuality in a very progressive and almost natural manner. There’s never a big fuss about the fact that Akira is in love with Yukari. The revelation comes in a very natural way, the same way it’d be presented if it was a heterosexual love, and more important it happens to the surprise of no one whatsoever.
I find that quite surprising in a country like Japan where homosexuality is still kinda taboo (much less in fiction than it is in the real world, though). On the other hand, the country doesn’t have retrograde Christians that will lobby entertainment directed at children. So, there is that.

2. On the other hand, Yukari is depicted in a very disappointing way in this episode. She’s usually quite strong and independent (to the point of selfishness), but in that episode, she becomes the very archetype of the damsel in distress. She seems to have no will of her own when seduced by the Prince or confronted with Akira’s feelings for her.
And when trouble arises, she’s incapable of saving or even defending herself. Despite the fact that she’s saved the day several times prior to this episode (although to be honest, the strengths and weaknesses of the characters vary according to what’s needed for the main plot of each episode).

I guess being progressive with both the depiction of LGBT characters in media and feminism at the same time was too much to ask.

Of course after this episode, Akira’s sexuality is never really alluded to again and her feelings for Yukari never resolved. Yukari seems to stay very straight. Still, that episode is a major step.

Disclaimer: Well, apparently there’s another episode that I missed where Yukari kinda realizes that she also has feelings for Akira… Apparently that Yukari-centric episode was pretty deep (for a kids’ show) as Yukari has to face herself in the mirror, about this and much more (her general aloofness and such). Yet, they never become a full-blown couple, though, and at the end of the series, we learn what they become in the future. And no, they don’t end up together. Yukari becomes a mom, she still makes killer macarons. And Akira becomes a doctor, helping others being her call.

However, after those episodes, they remain extremely close for the rest of the series (maybe they’re a couple, after all, it’s just not shown? I doubt it).

Another storyline I liked and that spread over several episodes including a few I missed is the fact that one of the enemies called Bibury finds redemption during the course of the show. I mean, it’s not uncommon in anime that someone is led to become evil by some external reason, and then later realizes their mistakes and that they’ve lost their ways, only to return to the righteous path. In Bibury’s case, the character seems to be plain evil at first and then later, she has an eye-opening experience, renounces her previous ways and somewhat becomes good.

And she’s not just a minor character either. Bibury is one of the main antagonists early in the season before bigger and badder baddies take over the spot.
Interestingly, once she’s good, she seems to lose all of her powers and she spends her days helping the heroes in their pastry shop, never in their fight against evil. Also while all the protagonists and their friends are full of life, positive feelings and all those sorts of things, she never really loses some of her gloom.
In any case, and while I’m by no means an anime specialist, it was surprising to me to see a character switch sides permanently in such a drastic way.

And here we are, one year later, Kira Kira Precure À La Mode ended two days ago, and I’m actually kinda sad. Not about the show itself, even though, I find myself more attached to the characters than I thought I would be.
No, I’m a bit sad, because what really brought me joy every week was watching my daughter watching the show.

My daughter is kind of an introvert when it comes to showing her feelings, especially the more subtle ones, especially the positive ones (also, she’s only 5, turning 6 soon, she is still learning about this whole “feelings” business). But every week, watching Precure, she lets her guard down, she’s totally herself, forgets her self-consciousness, and on top of being a good bonding experience with her, it really opened a window into her heart. Two weeks ago, watching her concern, her fear almost, and then her utter and pure joy as the final battle unfolded was priceless and unforgettable.

Also, Precure was her first cinema experience. Twice a year (the next one coming in March) there’s a special longer episode on the big screen. And last Fall, I brought her to the movies for the very first time of her life. I’m glad I got to do it with her (usually it’s a thing that happens with moms while dads are at work in Japan), it also was luck that the story was set in Paris (kudos to the artists for the backgrounds always taken from real spots in the city, even if they didn’t always make geographical sense).

During the entire movie, I wasn’t too sure how much she was enjoying herself. Wasn’t it too long? Too dark in the room? Too annoying for her that she wasn’t allowed to move or speak?
When we left the room at the end, she held my hand but kept quiet.
I asked her if she liked it.
She said yes.
I asked what she liked the most.
She said “everything” with stars in her eyes, and then she became quiet again.
Quiet like I sometimes am after watching a movie that really moved me and that makes words useless for a little while.