Yes, I know, I’m not talking about this season as much as I used to do with the previous ones (if you’re a reader of the blog and are wondering “what? he never talked about it before”, I used to do it on Facebook, but I decided to move it here so that people who are not my friends on FB can enjoy them too if they care).

Not sure why.
Don’t get me wrong, I’m really liking this season, but I guess, it’s taking me a while getting used to “TV Negan”.
In the season finale last spring, he was exactly like in the comic, but this season, not always…
And I don’t want to fall into the stupid trap of “he’s not like the original, so I don’t like him”. But it’s taking me some time to get used to his new avatar of the character.
The silly thing is that he’s not that different after all, but it’s the little things… Or maybe it’s because of the little things.

For example, most characters are exactly like in the comics (Rick, Michonne, Carl, etc), or on the opposite completely different (the Governor back in the days, Carol).
Negan is another thing completely. He’s mostly like in the comics, but some details here and there give him a different vibe.
It’s silly but for example, I talked about the fact that he was clean-shaven in the comic and that said something about him (interesting as he said twice that he needs to shave already, I wonder if it’s going to be a recurrent joke).
Another thing in the past two episodes is that he’s much more sinister and scary in the show. Don’t get me wrong, he’s plenty scary in the comics, but he’s scary for the characters, not so much for the reader. He’s actually quite funny in a way, mostly because he’s so over the top and theatrical. Also, he always seem to be having a jolly good time.
They showed that side a bit more during this week’s episode, still he remains darker and more openly threatening.
Or maybe he was like that in the very beginning and he lightened up later?

One thing that annoys me is the way he walks though. This kinda fake limping, swinging, something, is funny at first, but it gets a bit too much at times.

Now I understand they have to make him more threatening as Rick and Co had become really really bad-ass and dangerous by the end of season 6 (not as much in the comic, they don’t go wipe out several dozens of Negan’s men before meeting him and Lucille, just a handful). And on the other hand, Rick now seems completely defeated, in the comic, never completely.

Apart from that, great episode, really stressful at times.

Once again, hard to talk about things without spoiling or constantly referencing the comic. The pace of certain things are different. Some things are faster in the comic, some slower.

I still wonder what’s gonna happen with Daryl (remember he doesn’t exist in the comic, so he’s really the wildcard here, even more so because nobody is taken prisoner at this point of the story). I can’t imagine him becoming completely broken, Theon Greyjoy style. Maybe he’ll pretend to be for a while?

I like how Rosita is becoming a more important character, she’s been underused until now.

Father Gabriel’s little lie about Maggie was interesting. Not sure how Negan will take it when he finds out she’s alive.

Apart from that Andrew Lincoln proved once again that he deserves many Oscars, Emmys and whatnot.

One last thing on the dialogues. So happy they included “Little pigs, little pigs, let me in!” and I’m shocked (in a good way) that they also could manage to included “I shoved my dick down your throat and you thanked me for it”. Now, I also understand American TV rules even less. How is it OK to say that, but still not OK to say “fuck”? I just don’t get it. 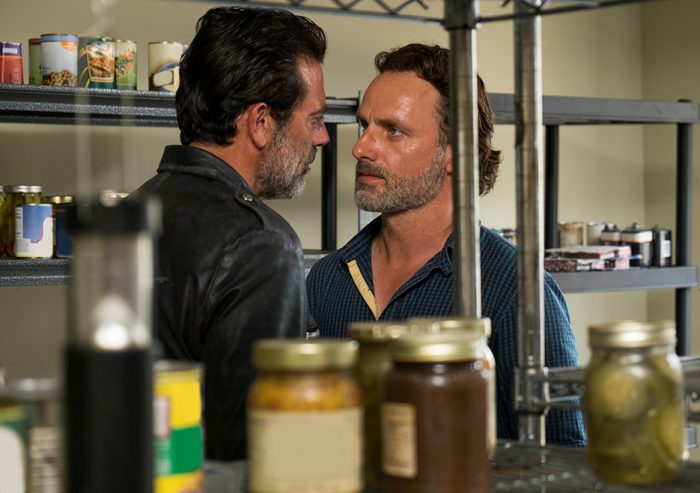