So, I haven’t talked about the Walking Dead this season yet (yes, sorry for people not caring about TV shows, but they’ll become a feature of this blog, but worry not, normal posting of the usual topics and pictures will also resume soon).
The thing is that it’s harder and harder for me to talk about this show without it being a simple comparison to the comic.
While I love the fact that for the past two and a half seasons, the show has really been following the comic closely, even very closely since they arrived in Alexandria, as a result, I just enjoy the ride, I don’t have much to “analyze” and “speculate” about.

OK, I’ll try anyways, but I gotta warn you, there will be a lot of “compared to the comics”…

I loved every single second of it. I had been wondering how they could adapt that moment, one of the most important moments in the whole series, in a way that would be at the same time faithful to the original material, and that would still shock comic readers and everyone else, because the shock effect matters there.

Killing Abraham instead of Glenn, and then killing Glenn anyway was genius, and the lame cliffhanger from last season is forgiven and even makes sense. I knew that Glenn was going to die, but it was still surprising. I knew Glenn was going to die, because he had to die. I don’t want to spoil, but his death is crucial. Because he had been with Rick since the very beginning, because he was the moral compass of the group, because he was the only one who had remained somewhat “unspoiled”, his death will affect everyone in a way that someone else’s death wouldn’t. Many future events simply can’t happen with Glenn alive. Consider it some sort of butterfly effect, his death triggers most of what happens next, directly or indirectly. 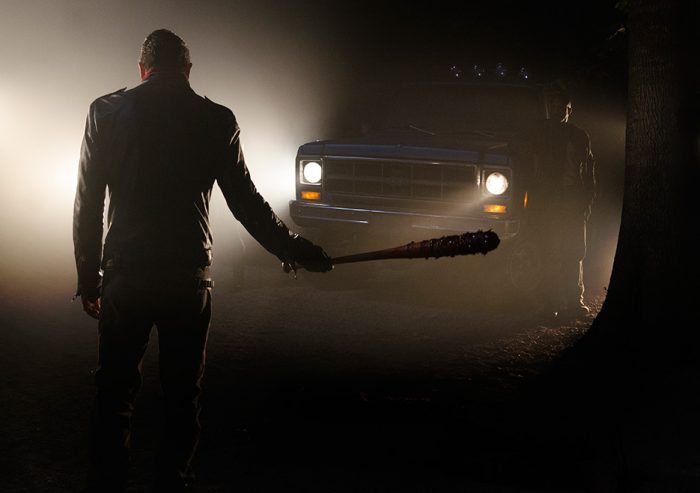 Negan is simply perfect. They couldn’t have adapted him in a better way. I’m gonna leave it to that at the moment.

Just one thing. It seems trivial, but it really bothers me that he has a beard. I think that the fact that he’s originally clean shaved adds to the character in a “it’s not this silly apocalypse that will prevent me to fucking get a fucking shave in the fucking morning” way (yes, the lack of “fucks” is also a shame, but I’m used to it… American TV, where you can show one of your main character’s eye pop out of its socket, but where you can’t curse).

Rick. The way Negan breaks him is also perfect. In the comic, Glenn’s death is enough to “break” Rick, but after what had happened on the previous episodes (where they killed a bunch of Negan’s people and all that), it would require more to break Rick. That was done perfectly. Also, note how the only person who is not “broken” by the whole ordeal is Carl, even telling his dad to cut off his arm to ease everyone’s pain. Of course, it matters. Carl is becoming more and more a central character. Some people are saying that the Walking Dead is his story, and it simply could be true.

The ultra-violence: I read and heard a lot of criticism saying that this episode was just too much in terms of violence, gruesomeness and such. It’s kind of true, but it’s not gratuitous. It was necessary. As previously mentioned, we have reached a peak, a climax in our story. We are at a turning point. Nothing will top this, nothing has topped this in the comic yet (only one moment sorta approaches it, two seasons or three from now, but not really).
I think it is necessary for the viewers to be punched in the gut at this point of the story, they have to go through the same ordeal as the characters (well, what the viewers have to endure is obviously nothing compared to what the characters go through, but you get the point).

Also, to the people who complained that the Walking Dead is becoming a bit like Games of Thrones as far as the “who’s gonna die next?” game is concerned, I’m going to spoil you a little, but from now on, until where we’re currently are in the comic, that is 60 episodes later (two or three seasons of material), only one other main character who is present in the episode has died… very recently.

Now, the second episode of the season.

I was a bit surprised that the Kingdom would be introduced so early after introducing Negan. In the comic, some time goes by between both. But maybe because Negan’s introduction was so gruesome and so traumatic, it was necessary to have a complete change of tone very early. The Kingdom and Ezekiel fit the bill.

At first, I was a bit unsure about Ezekiel. His over-the-top persona works well in a comic book, but in a TV show, it may look very silly very quickly, and I think they got really close to that point. Fortunately, right before it happened, the writers did something great; they revealed Ezekiel’s “secret” (that he was just a zookeeper with some acting experience) just before it got too over-the-top. This allowed for the character to “work” and even better, it gave him some substance instantly. In the comic, I always felt that Ezekiel lacked some, and maybe it’s because the character was already established for a little while before he revealed his backstory.

A few words about Carol. I’m not sure I like her nervous breakdown. I prefer the “no after-thought, matter-of-factually killing you if needed” Carol. But I guess it’s necessary. If not, she would become some sort of heartless, emotionless Terminator. First, not the best direction for any character, but it wouldn’t work at that moment when everyone needs to be “broken” facing Negan. Cold-hearted Carol wouldn’t work against Negan. Also, I really liked that chemistry with Ezekiel. I assume she’ll take comic-Michonne’s spot (in the comic Michonne never gets romantically involved with Rick, but with Ezekiel). That’s one of the fun things about the way they adapt the comic, most of the same things happen, but not always involving the same characters.

As far as Morgan is concerned, I’m really curious where he’s headed. He seems to be at a turning point too, as he has now killed someone to protect Carol. Where will he go from there? Not sure.

OK, that’s all for today, some random and disorganized thoughts as usual with TV shows.

Add your two cents in the comments.