Skip to content
This season is over.
Finally!
Never before I have been so happy for a season to be over. I mean, usually, once the Reunion show ends, I’m always a little sad knowing that I’ll never see again some of the people I have followed and rooted for or against during four months.
This time?
Yes, I’ll be sad to not see people like Francesca or Ralph again, but this sadness was nothing compared to the joy of being done with Natalie, Ashley and hopefully Boston Rob (although, I don’t believe he’ll never be back).The episode itself?
The least suspenseful episode ever. I know the editors didn’t have much material to make it very interesting but come on, at times it seemed like they were going out of their way to spoil the episode:
-Night before the final challenge at Redemption Island, Andrea: “oh, I can’t win against these strong guys” Mmm… I wonder who will come back from Redemption Island…
-The following day, Rob: “If she doesn’t win immunity Ashley is gone.” Guess who won immunity 5 minutes later? Worse, the Rob/Editors combo pulled out exactly the same “misdirection so bad it’s telling you what’s going to happen next” the previous week.
Embarrassing.
What has happened to you Survivor? 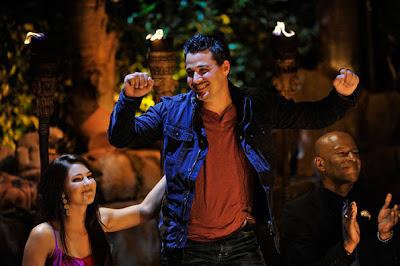 I don’t think Redemption Island is a terrible twist. But I think it needs to be reworked.
I lean towards ditching it at the merge.
As for the anti-climatic dimension it brings to the game, both the snuffing of the torch that becomes less dramatic and the totally undramatic exit of the person that gets eliminated in the duel, a good idea could be to have the duel happening right after tribal council, literally right after. Let’s have the duel arena right behind the tribal council area, and as soon as the torch is snuffed, the person voted out goes to the arena and duels against whoever is waiting for them there.

Concerning the last duel, well what can I say? Redemption Island wouldn’t have been a let down if the person returning to the game shakes things a little, not get voted out again right after. And this is what happened twice.

So ok, Survivor powers that be, you’re having Redemption Island again next season. Fine. But you’d better make changes and most important, if it sucks again, you’d better ditch it for good.

So we had to deal with the most predictable final three ever (when did I talk about them three in the final three? I believe that was pre-merge) and it also as the most unlikable one in the form of one bastard and two goats.– Natalie Tenerelli: I loved her responses (irony here) at the final tribal council. Basically her Survivor experience was about going camping and her way of convincing the jury was to tell them that she was very good at riding coattails and at being Rob’s slave (no creepiness intended).
– Former Federal Agent Phillip Sheppard:Phillip did disappoint me. When he put those three of four feathers on his head and this red blanket on his back heading to final tribal, looking more ridiculous than ever, I thought he was setting the stage for what I had been expecting for a while now, that is Phillip final statement going as follows: he stands up, throws the feathers and the blanket away and with his most suave jamesbondesque voice tell everyone how it was all an act and that he played them all. But no, he didn’t. Phillip is indeed this lunatic guy.
– Boston Rob Mariano: I still don’t understand why CBS made us suffer through all of that just to write a one million dollar check to Rob. Couldn’t they just do it off camera and have a normal watchable season sans Rob and Russell?
And please people, stop saying that he played the best game ever. Playing the best game would be playing that game in Heroes Vs Villains, you know, one of those seasons where he didn’t even make it to the merge.
What he did there, would be like me playing French Scrabble against a bunch of random Americans. Yes, none of them would stand a chance against me, would that make me the best Scrabble player ever?
I doubt it.
Oh well, if we had to suffer that season and if in return it’s a sure thing that we never see Boston Rob again, maybe it was worth it.
A few last words about the jury:
– Andrea Boelhke: She finally tried to make that big move I had expected her to make all season long when she returned from Redemption Island. Too little too late. I really hoped she could become an interesting player. Another wasted opportunity.

– Ashley Underwood: Wow, she almost played the game just before being voted out! I’m impressed. Strangely, although it would have made me sick to my stomach if she had been in the final three, I surprised myself rooting for her in her last challenge just so we have an interesting final four vote. Didn’t happen, and soon enough, Ashley returned to her normal self of a useless whiny spoiled bitch. I hope to never see her again.

– David Murphy: My favorite to win this season. 🙁 Maybe he should have aligned himself with Russell when he had the chance. His final tribal speech was interesting, and it was funny to see him becoming a lawyer again, not addressing the defendants but the jury. Oh and if you watched the Ponderosa videos, I found him hilarious, I’m convinced that he spent most of his time in Ponderosa drinking. Look at him welcoming the bootees every week, if he’s not buzzed, I don’t know what he is.
I have the feeling we’ll see him again of Survivor as he has much more to offer to this game.

– Grant Mattos: Welcome the Lex & Big Tom club Grant. I feel for you man, but this is what happens when you’re a guy and make friends with Boston Rob on this game. Grant had a lot of potential too but it got wasted the second he decided to become Rob’s right hand man.

– Julie Wolfe: I regret being mean about her at the beginning of the season, she seems like a great woman.

– Matt Elrod: What can I say that I haven’t said already? Maybe I would have liked Matt had he learned just a little bit to play this game and if he knew how to talk about anything else but his god. If anybody reading this wonder why people can be crazy enough to blow themselves up in the name of god, just look at Matt. How long do you think he would hesitate if anybody with enough influence (his church’s minister?) told him to blow himself up in the name of god?

– Mike Chisel:He also had a lot of wasted potential, but man, can anybody be more devoid of humor and self-distanciation than this guy? A robot is funnier and has more levity.- Ralph Kiser:Fun guy. I thought he’d be better at the game, although he didn’t have much room to navigate.
– Steve Wright: I went back and forth between liking and disliking him. In the end, I’m still not sure about him. I guess he realized that he is now an old guy during his time in Nicaragua, and it’s not always a fun thing to realize.

I’ll have plenty of opportunities to talk about next season before it starts, but the intro got me worried. Redemption Island again, alright, I can deal with it, maybe it will play out differently. But two returning players again? After this season’s debacle? Really?
Probst really wants to alienate old fans or what?
Of course I want to know who that will be, hopefully people that I’ll be happy to see again, and people that will be faced with people who have a brain on their own this time.

And you? What do you think? Who do you think is out next, will come back from Redemption Island and who will win it all?

3 thoughts on “Survivor 22 – Redemption Island: It was indeed a no brainer.”