Skip to content
Alright people, you’ll have to be good with me. As I mentioned yesterday, I was too busy to blog about this week’s episode and today, I’m having a hard concentrating on this as the sad news from Japan are “diverting” me the say the least (for those who don’t know I have some personal connections to Japan, and while I don’t know anybody that was directly hit by the earthquake and the tsunami, it is unsettling nonetheless).Ok, let’s talk about Survivor.
Another interesting episode, although I’m getting more and more annoyed at the casting directors and/or editors for having so many uninteresting people season after season lately. Samoa was a bore and would have been the worst season hadn’t it been for Russell. Nicaragua, not that many interesting people either. This season, luckily we have Zapatera which seems full of interesting people, the problem being that we almost never see them. So, sure, seeing Ometepe‘s record, we can expect almost all of Zapatera to make it to the merge and it should be their game after that, but still… Why do we need so many Ashleys, Kristas, Natalies and Grants each season? The eye candy, I understand that, but can’t the casting department find beautiful AND interesting people? Don’t they exist in the US anymore since the last time I was there? 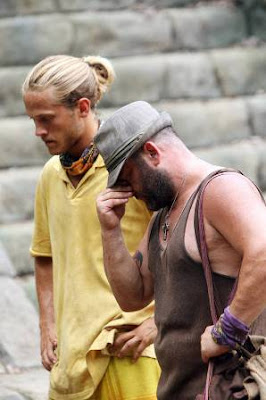 – Russell Hantz is gone: A few things about Russell’s demise. Of course, I’m quite happy about it, yet, I’m kinda annoyed with how all of this is getting blown out of proportion. They didn’t make such a big deal when Amanda Kimmel was finally voted out in Heroes Vs Villains. Sure, Russell is one of the biggest villains to ever play Survivor, but that’s it. What about Russell’s legacy? What legacy? Too many people forget that if he lasted in Heroes Vs Villains it was uniquely because nobody had seen him play. If any of his tribemates had had the chance to see one single episode of Samoa, he would have had the treatment he got this time, aka first boot from his tribe. The crying? Yeah, I guess it was sincere -I still have a few doubts- but it’s easily explainable by the fact that the three seasons Russell played span only over 13 months, the guy never really left Survivor in his mind during the whole time. Compare that to Rob who played the first time 9 years ago…
– Matt Elrod lives another day: What if Matt survived until the end? It seems unlikely, but who knows. From his interviews, the guy seems quite level-headed, sure he will need some luck, but if he beats Kristina in the next duel, after that it should be a piece of cake, dueling against people like Phillip or Krista. Still, he may have scrappy Stephanie pitted against him, as well as Andrea. Rob will be thinking of that, putting Andrea against Matt in Redemption Island, as he obviously can’t afford to have both back together if Matt succeeds in coming back to the game. Yet, even if I like the guy more and more, I still doubt he will manage to win every single duel. 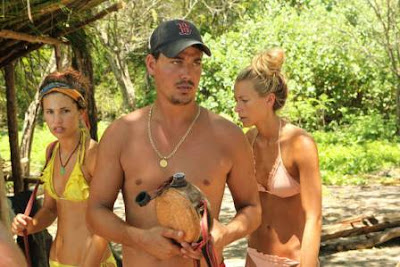 What a useless tribe. I almost liked them at first (well, because I like Francesca and Kristina), but now I hope they pull a Ulong and that we can focus on the interesting people over at Zapatera for the second half of the season.

– Andrea Boehlke: She seems to be back in the fold. It’s not that it is the best thing she can do right now, it is the only thing she can do. She will have to make a big move if she doesn’t want to be voted out soon. I mean, huge bold move, rally-everybody-against-Rob-and-blindside-him big. Can she do it? No, not with this tribe full of Ashleys and Natalies. Andrea days are numbered and I wouldn’t be surprised if she was the next out.
– Ashley Underwood: Before the beginning of the season I didn’t like her because I expected that she was going to be annoying. Instead she’s being useless, Purple Kelly style…
– Grant Mattos: He’s happy with his “I’m Rob’s right arm” position. That’s not enough for me to find you interesting dude, sorry. I thought I would maybe root for him before the season start. Not likely to happen with this (lack of) game.
– Kristina Kell sent to Redemption Island: She was a dead-woman-walking since day one. Sad, I liked her and she was an interesting character, but she was unlucky enough to end in this tribe, as well as she played too hard too fast in the beginning. Still, it’s always sad to see people that want to play leave so early when useless people stick around.
– Natalie Tenerelli: Talking about useless people…
– Former Special Agent Phillip Sheppard: He is gold. And after all maybe he was a special agent, he could tell that Ralph was lying… OK, maybe everybody could, I don’t know, I was not there. I’m not sure how long he’s going to stick around. It seems that his days are numbered, but according to next week’s preview, maybe he’ll be around longer than expected. Long enough so that Survivor 24 be “Lunatic Island, Coach Vs Phillip”? Who knows?
– Boston Rob Mariano: So? Do you still see Rob as a hero? Let’s see what did he do this week? Oh yeah, went to look -and find- the immunity idol in the back of his “alliance” What next? Oh, keeping on getting rid of the strongest people in the tribe despite being on a losing streak because he sees them as threats (reminds me of Marquesas). Considering his alliance as people working for him and not with him (to his defense, they also consider themselves as working for Rob for the most part. Sure he is in total control of his tribe right now and has a sure spot to the merge. But then, if he thinks that the idol will protect him long, he should think again. If he’s not the first one voted out after merging, he’ll be the second one (in Heroes Vs Villains he underestimated idols, this time around, I think he will overestimate it and get burnt by that). That will teach him getting rid of the wrong people early on (No, I will never forgive him for Gina and Hunter) 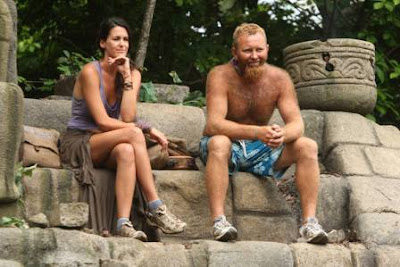 Not that much to say about them as a tribe this week. It seems that they will just be cruising to the merge (and in case of any lost challenge, they have two people to weed out)
– David Murphy: Almost nothing about him this week. Sad. 🙁
– Julie Wolfe: Last week the editing made her look like the sixth member of the alliance and as if she could sway towards the Russell alliance. I really think it was all editing, and regardless of whether she’s actually at the bottom of the alliance or not, she feels like she’s not. If I was the other members of the alliance though, I’d still keep an eye on her if Stephanie tries to stir up some shit as well as when the merge comes. Just in case.
– Krista Klumpp: She had a chance saving her skin this week, by acknowledging that Russell was a virus and now that he’s gone, the group will be stronger. Instead of that she stood her ground, behaved as if there was still a “Russell Alliance” (apparently she really wanted him to go far and possibly win, I still don’t understand how some people playing this game could want other people playing with them to win… That includes most of Ometepe too. I guess this is the difference between people playing Survivor, and people going there to be on TV or I don’t know what… enough with those!)
– Mike Chiesl: Still not much of him this week, although I like him more and more (a rare thing for me when it comes to people whose job is to kill other people, but it’s ok because they’re not American), first he seems able to think, and he also can be (unwittingly?) funny. See his comment about not thinking about sex in two weeks.
– Ralph Kiser: What did I say last week? Oh yeah, he was going to become too cocky and make big mistakes from this. There we go! I didn’t make one but two big mistakes this week. First revealing to his alliance that he had the idol. Although it was a good thing for the alliance’s mood (no more paranoia about the fact that Stephanie or Krista may have it), it’s a very bad thing for his game. Not mentioning that it planted the seeds for tensions in the alliance. A bigger mistake was falling into Russell’s trap and revealing to Phillip (and eventually to Rob) that he had the idol. Omotepe will gun for him now at the merge, and who knows how this is going to play out (it could be interesting if Ometepe targets Ralph, Zapatera votes against Rob and both play they idols… I see a lot of split votes that day). I always had doubts that Ralph could go to the end, now I’m pretty sure he won’t.
– Sarita White: She’s slowly becoming my favorite contestant this season (although I want it to be David, but we really don’t see enough of him). I’m still not sure why Russell said that she was in charge, according to herself, she’s not (see extra scenes on cbs.com), but it may not matter if Ometepe believes it and tries to vote her out at the merge. She did as much damage control over Ralph’s big messing up. I still think she’s safe to go far.
– Stephanie Valencia: There’s nothing to say about her. I just can’t wait to see her gone.
– Steve Wright: Not much about him this week.
Speculations for the merge: I’m changing my picks a little bit from last week.
Right now, a merge at 12 people looks like this to me:
-Zapatera: Sarita, David, Mike, Steve, Ralph, Julie and Krista
-Ometepe: Rob, Grant, Ashley, Natalie, Phillip
For a 10 people merge:
-Zapatera: Sarita, David, Mike, Steve, Ralph, Julie
-Ometepe: Rob, Grant, Phillip, Natalie
Next person voted out:
–Ometepe: In the preview Rob hints that he will want to keep Phillip over some of his groupies, so I think Andrea is done (and Rob won’t be able to resist sending her against Matt).
-Zapatera: Don’t believe the previews, I’m sure they’re misdirections. Stephanie is gone soon.
What are your thought? Do you agree? Do not hesitate to comment.

2 thoughts on “Survivor 22 Redemption Island – Don’t You Work For Me?”