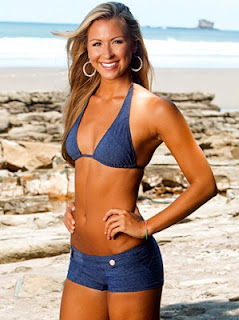 First “issue” with her, she’s not very clear about her job. She’s at the same time “nurse by education” (understand: she’s never ever actually been a nurse), a model, an ex-professional basket-ball player (in Switzerland), a “business owner” (what kind of business?) and a barista too.
Why does this annoy me? Well, I don’t care about what she actually does for a living, but apparently she cares enough (and is embarrassed enough?) that she doesn’t explicitly says it. And I don’t have a very good opinion of those kinds of people in general. Especially when she underlines things that “I’m a nurse by education.” Sorry, but if you don’t work as a nurse, you’re not a nurse, period. No need to mention it, your education won’t impress anyone, unless you’re a post-doc.
Also that gives out the feeling that she’s one of those contestants that are there not because they love the game, but because they want their 15 minutes of fame, hence the public image she’s trying to create by trying to impress us with her resume.
What are her strong points in my opinion?

What are her weak points?

How will she do?

What do I think of her so far?

One thought on “Survivor 22 : Ashley Underwood”