Skip to content
Yeah! Survivor is back! This blog will be more active! Although, to be fair, I haven’t posted much on it lately mostly by lack of time more than anything else. There are many topics that I meant to tackle in the past few weeks and I just couldn’t find the time to do it. But for Survivor I make time!

So the two main things this season so far are the fact that tribes are divided according to age and… Jimmy Johnson!
Older tribe vs younger tribe?
I gotta admit I like the idea. Nothing better to create a rivalry than a non-random division of teams. And that will help preventing the early targeting of older people by younger ones. Funny how on this season of Koh Lanta, the French Survivor (which sucks big time by the way), tribes are divided according to gender (yes, Survivor did it before, twice), and it seems that the reason they do it is that, there, men always target women. On the one hand that tells a lot about French machismo, on the other hand, if the producers didn’t always make them have physical challenges, women would be more competitive and wouldn’t as often be the reason that a team lost.
The second main thing: Jimmy Johnson!
This is the first time that a celebrity goes to Survivor, and I gotta admit I love the idea (as long as it doesn’t become a habit in the future). We’ll see as this works out as it goes. (in case you didn’t know before, Jimmy Johnson was not casted into the show, he’s a huge fan and it was the third time he applied). 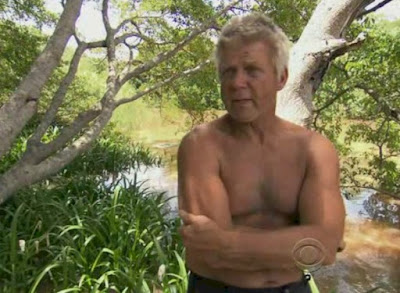 My impressions of the first episode?
Oh well, just like any season opener, it’s not the greatest episode as we don’t know the characters and most of the episode is spent on introducing them, and I gotta admit that Jimmy Johnson had a little bit too much of air time. That could mean one of these two things: the editors tried to capitalize on his celebrity for this season opener, some sort of parallel with the “starstruck” feeling some of the contestants did feel when they saw him, and soon enough he’ll be treated (camera-wise) just like any other contestant. The other reason could be that he won’t last long and they try to capitalize as much as they can on the few days he lasted. I hope that won’t be the case because I want to see what impact he’ll make on the show.
Let’s talk about the contestants a little.
La Flor Tribe
Let’s admit it, the younger tribe -especially because they won the first challenge- will get cocky, won’t respect the older tribe, and it’s going to come back to bite them, and it will be fun to watch. 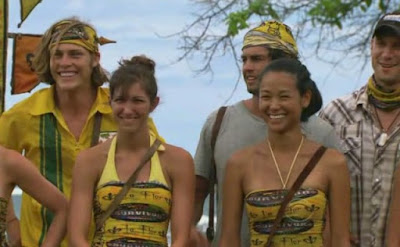 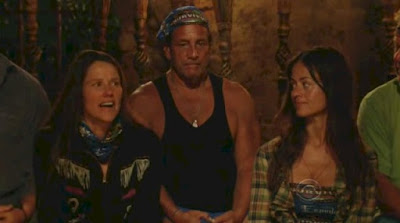 The older team seems more interesting that the younger team and as the underdogs we’ll of course root for them, unless they’re all obnoxious, which won’t happen, because they all seem like very interesting characters with lots of life experience and stories to tell.
Next week: Well, it’s pretty hard to make guesses this early in the season. Apparently, Dan has trouble walking and that could cost him a lot. In the La Flor tribe, I’m not sure who could go first, although I can imagine Shannon and Chase targeting Jud or Kelly B., and the rest of the team ganging up on them.