Skip to content
Seriously, this season has to be one of the best ever, don’t you think. For the past few weeks, the main engine of the show was the battle between Boston Rob and Russell, one of the biggest duel in Survivor (duel of players, duel of egos, duel of everything), and there was a possibility that everything falls flat after this battle is over. Luckily things keep on being more than interesting. Let’s keep our fingers crossed that it stays this way until the end. My only fear is that with all the big characters falling one after the other we end up with a winner that’s disappointing…
Heroes 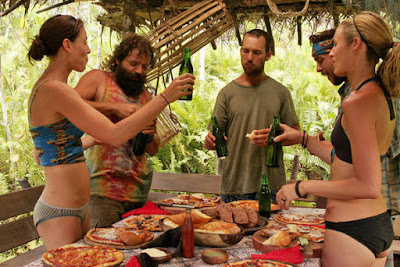 Have the Heroes finally got it together or are they winning solely because it’s the Villains that are falling apart? I assume a little bit of both. But united, they’re not.
Amanda Kimmel
She’s a follower, she needs somebody to follow in this game, and right now, with James gone, she must feel quite at loss. Is she really tight with Rupert? No. Candice? Maybe. JT? Maybe she was, but this week she made unwillingly a very big move by catching JT red-handed with the hidden immunity idol. I still don’t think she has a strategy though, and I still think she hopes on being reunited with Parvati soon.
Candice Woodcock
She’s playing a good game right now, but her options are very limited, now that Colby seems to be back in business, if there’s no merge next week and the Heroes go to tribal council, she could be next to go, unless she manages to make everybody else vote JT out, but I doubt it.
Colby Donaldson
What did he do this week? I have forgotten already.
James “J.T.” Thomas, Jr
Did he do the right thing, going and finding the hidden immunity idol by himself when the tribe had decided to find it and use it as a group? Not sure. I guess the answer would have been yes if he hadn’t been caught by Amanda. Although, at this point, he really should play with the group. Thankfully for him, he also had the right reaction, not trying to keep him for himself then. Unfortunately, the damage is done, and I don’t think many people still trust him in the tribe. Rupert maybe?
Rupert Boneham
He’s still clueless about how this game works. Now that I think about it, it’s really a mystery as for about why he’s so focused on the “bonding” of his tribe and nothing else. I mean, in his two previous seasons, he did some strategizing, not the best ever, but not that bad either. I guess he’s simply not aware that the game has evolved, he still thinks that all he needs if to have a strong alliance before the merge, and float with it after the merge or something like that. And what about that ridiculous assumption he made at the Reward Challenge? Simply because Rob (and Tyson) had been voted out it had to be a girl alliance? Really? Why? And more importantly why did he have to tell it out loud? So that Russell can jump on it right away and start manipulating the Heroes even days before the merge? Rupert, your stupidity will hurt not only yourself, but your whole tribe now.
Villains 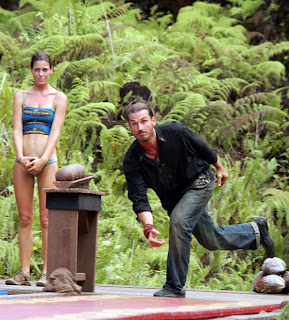 I’m gonna write pretty much the same thing as an introduction, but it really was Tyson’s awesome personality and Rob’s leadership that held that tribe together. Now that they’re both gone, the tribe is completely falling apart, and will most likely continue to do so until the merge, and maybe beyond that. Oh well, this is what makes this episode great, so I won’t complain.

Apart from that, I’m pretty much sure there’s a merge next week.

Next person voted out:
If there’s a merge, JT is in more trouble than I though, as he’ll be the obvious target from the Villains, and if he on top of that gives the idol to Russell, he’s toast.

If there’s no merge and the Heroes go, JT is in trouble too.
If the Villains go, Jerri is alone now, but Courtney is still in a lot of trouble.