Wow, this episode was amazing, one of the best ever. That tribal council?! Definitely the most incredible in Survivor history. First I was disappointed it was not going to be a Russell Vs Boston Rob, it’s even better, it makes the Russell Vs Boston Rob feud even stronger and bigger… 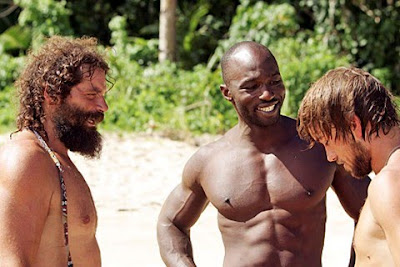 What is there left to say about them, expect that they’re one of the stupidest, lamest, worst tribes in Survivor history? JT is the only one that still has some respect from me, because he’s the only one that knows how to play this game. All of the other ones look like they’re beginners, not two or even three timers.
Amanda Kimmel
OK, Amanda also kinda knows how to play the game, expect she’s playing it exactly the same way for the third time in the row. Did you win the first two times Amanda? Well, I guess that if she heard me now she’d respond that the did get to the final council both times, so that strategy works, and she just needs to change her final council strategy. I guess she wouldn’t be totally wrong, but look at your tribe, do you really think you can make it to the final council? Once again, if she makes it to the merge, she would get back with Parvati and whoever else Parvati is with, and that could work. OK, so I guess I’m a little harsh on Amanda, her strategy is not so bad, it just relies on too many imponderables.
Candice Woodcock
OK, I admit, Candice is not doing too bad either, she has no alliance, no friends, and so far she managed to survive. Except that hadn’t she won that individual immunity, she would have been voted out in an unanimous vote, so I’m not sure how much she really deserves to be complimented.
Colby Donaldson

Colby is useless, the guy never could play strategically, and now he can’t even rely on his body anymore, he is an old guy, whether he likes it or not. People thought James was a dead weight? All this time he has been the real dead weight in this tribe. And the way he was mad at Candice for voting against Tom shows once again that he has no clue how this game is being played. Colby, sticking to your word, being chivalrous and those things work only if you’re in the majority, not when you’re scrambling for your life, and for Candice not voting against Tom would have been suicide, but I don’t think you can understand that.

James Clement voted out
Not voting for James last episode was stupid. Voting for James this episode was even more stupid. But I guess that shows the level of strategy those people have. Why did he get voted out again? Because he lost a race to JT (everybody would lose a race to JT in that tribe, and why didn’t Colby take part in this race?), because he eats too many bananas, and because he’s not doing much around camp. Lame…
James “J.T.” Thomas, Jr
JT is still in control, but there isn’t much left to control. And he’s kinda running out of options, especially since Tyson got voted out. Seeing his face at tribal when he saw what happened in the Villains tribe tells us that he was relying on getting back with Tyon and Coach one way or the other after the merge. So sure, before the merge, he won’t go anywhere anytime, there’s no way Amanda, Colby or Rupert target him (Candice could, but what can she do alone?) but unless he arrives at the merge against a very divided Villains tribe, he’ll be their first target and I don’t think he can do what he did in Tocantins and pitting the Villains against each other (it will be possible after JT gets voted out ironically).
Rupert Boneham
Whatever. I don’t really have anything to say about him. He’s just a pawn. 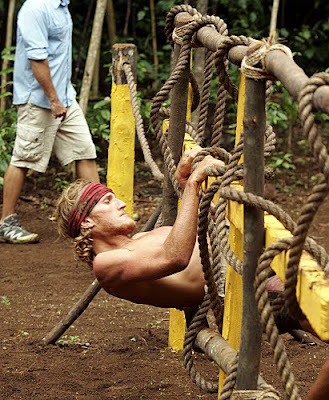 That’s it, the game is finally full on in the Villains tribe. That tribal council…. I can’t even start to describe it, go watch it if you haven’t already (why exactly are you reading this if you haven’t seen the episode by the way?). Contrarily to the so-called Heroes, here is a tribe that’s keeping its promises, and seeing how the Heroes are faring, it looks like there are going to be a lot of Villains in the final 7-8-9 and that could make it the best season ever, a season with only people that know how to play this game (my dream season would of course be a season where every single player knows what the word strategy means).
Benjamin “Coach” Wade

So Coach, tell us about loyalty and heroism a little bit… Just when I start to have some sort of almost respect for him, what does he do? Exactly the contrary of what he preaches. And Russell gave him a little reminder of that at tribal. He should realize that he is at the bottom of the pecking order in Rob’s group, not necessarily in Russell’s, but of course those are things that he’s not really able to realize.

Courtney Yates
Still almost no Courtney this week… Damn, I hate when we don’t hear Courtney comments. Still, her looks tell lots about what she thinks of this or that, and what she thinks is that she doesn’t really give a damn, she’s just amused by things.
Danielle DiLorenzo

She’s actually quite ugly without make-up and her boob job is really bad. Sorry, this is all I found to say about her this week.

Jerri Manthey
So, Jerri is in Rob’s alliance… Interesting… I was not sure until now. And that’s not very smart of her, as she is at the bottom of that alliance, probably even more than Coach, just because she hates Parvati… Oh well, it’s not as if I cared for Jerri, she’d also be at the bottom of my alliance.
Parvati Shallow
I can’t believe what happened at tribal, and I’m sure Parvati can’t believe it either. She was toast, and Russell – out of nowhere – gave her his idol and saved her. She seemed really and genuinely touched. I’m not sure what it means for later. I’m really at loss here. I thought Russell and her were going to betray each other at the first occasion, and not only that didn’t happen (like Tyson thought, she and Danielle should just have voted for Russell that was the most logical move to make for them) but now their alliance seem very strong, and just like that it makes her and Russell the dominant people in the Villains tribe and in the game. Which brings us to…
Rob “Boston Rob” Mariano
Oh my God, the face Rob made when Russell gave the idol to Parvati, and then when she got that fourth (void) vote that could mean only one thing: no tie, Tyson gone, his plans totally crushed. I’m sure he is convinced that somebody else – not Tyson – gave that fourth vote that messed everything up? And he may go into some search and destroy rage against that person or something like that. And that event totally weakened him, now his alliance may just disappear just like that, anybody can flip on Russell’s side next week, and he could just be alone and out in a blink… Can’t wait for his reaction next week….
Russell Hantz
To the question “Can Russell play in the big league?” I guess we got the answer this week. He taught everybody, you, me, Boston Rob, a lesson in Survivor. What a way to be ahead of everybody else’s game. Commentators are saying he made a crazy move, to give the idol to Parvati in such a way. I don’t think it was crazy, I think it was just brilliant. He knew Parvati would get more votes than him and that his manipulation of Tyson (and/or somebody else) had worked. And that moved not only ousted Tyson, it cemented Parvati’s alliance and weakened Boston Rob in the possible best way, I don’t see how some people won’t defect from his group, especially Coach after Russell put him on the spot that way. Like him or not, Russell is really one of the best player to ever play this game. His only problem is his weak social game, it cost him the victory last season, and it may this time again.
Sandra Diaz-Twine

Tyson Apostol voted out.
I’m mad. I’m not mad that Tyson got voted out. I’m definitely sad and disappointed, but not mad. I’m mad at the editors who haven’t shown almost anything about Tyson this season. I thought it meant that he was gonna shine later, not it meant that even the editors are too enamored with Boston Rob or something like that. Sure he had a much more under the radar game than last time, but his confessionals were as awesome as usual (one can see some of them on CBS website) why not show them?
Concerning his “dumb” move, some people consider it the new dumbest thing ever on Survivor, but really I don’t think it was. Sure he could have stuck to the plan, he was 100% safe with that plan. Except that he had reasons to mistrust “split votes” (that’s also because a split vote that he got voted out in Tocantins) and as he said in his “day after” interview, Danielle and Parvati should have voted for Russell had they been smart, and him voting for Parvati would have been an amazing move had it worked that would have cemented his position in his tribe, both with Russell and Rob and anybody else really.
Tyson, I will miss you dearly, you’re one of my favorite survivors ever.
Thank god there’s your awesome blog and your twitter (as I’m afraid we won’t see you on TV again anytime soon). And seriously his twitter is one of the best I’ve ever seen, Tyson is one of the few people on Earth to use Twitter the way it should be used, that is not to tell the world that they’re waiting in line at the grocery store, but to use it as a place to share witticisms with the world.
Alliances:
-Russell, Parvati, Danielle.
-Rob, Courtney, Sandra, Jerri.
-Coach.
Next Week:
I have the feeling that there could be a twist next week. I don’t know.
In any case, it’s gonna be a full out war between Rob and Russell. Who’s gonna win is still up in the air, but the momentum is definitely on Russell’s side.
Next person voted out:
If the Heroes go, Colby is gone (but who knows with them).
If the Villains go, Rob could be in trouble.

Merge prediction:
Back to something similar to my previous prediction for the heroes: Amanda, JT, Rupert, Candice, Colby for the Heroes.
For the villains, Russell, Parvati, Danielle, Coach, Jerri, Courtney, Sandra.
I’m always assuming they’ll merge at 12 people, but really I have no idea.