Interesting episode, but a little more of the same. The Heroes are falling apart because egos don’t allow to have team unity. The Villains have it together, but something nasty is brewing, something very nasty… I can’t wait ! 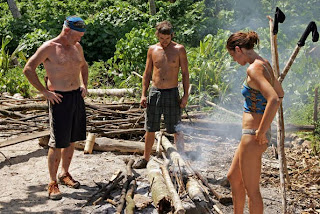 The team is really falling apart, and I don’t see any way out of this…
They’re not winning challenges, their spirits are down, and this won’t get any better. They’ll need some sort of twist to stand a chance.
Amanda Kimmel
Her logic for keeping James is that he’ll do and vote exactly how she wants. But as we know, she’s not the most decided person. So if none of them is the leader, who will it be? So far it looks like it’s JT. Not a good thing for Amanda at all. Of course there’s a genuine friendship with James, she couldn’t hide it at all when James returned to camp. Although, there’s no need to hide it, as it’s a secret for no one.
For thosewho wonder, Probst included, why on Earth she is ready to keep an injured James over Tom or anybody else, even if it weakens her tribe, I think that the reason is that she (and Rupert and JT) assume that when the merge happens, the Villains will be divided and she’d rather not have any hero that is likely to switch sides then because they’re on the outs, and at the same time, she hopes that Parvati will have made some friends on her side, and that they will all ally together and get rid of the other alliances. That could work, if… there are a lots of ifs, way too many to rely on that plan, but it could work. It’s still not very smart to have that as your main plan, as Amanda obviously does.
Candice Woodcock
Why wasn’t Candice targeted at all for that vote is strange to me. When Tom knew he was likely to be chopped off, instead of butting heads with James just another time, and get the boot, why did he target Candice instead? Team James would most likely have followed. More power to Candice to have avoided that situation, even though I’m not sure if she has anything to do with it. Still, she’s sneaky and could manage to be on the right side of the votes for a while. Concerning her vote, its obvious that she voted against Tom because she knew he was toast and she wanted to make sure the others don’t think she sticks with him and Colby, although that was what made the most sense.
Colby Donaldson

So Colby plays strategically know. That’s what he said. How? By refusing free chocolate to be able to “focus” on a challenge to get… chocolate? A challenge he didn’t even take part in? Apart from that, I don’t know.

James Clement
What will James do now? Sure, his alliance has proven that they’re loyal to him, but if he can’t walk, how long does he hope to stay in the game? I guess he hopes that he’ll get better in a couple of days. Mmmm… I doubt it.
James “J.T.” Thomas, Jr
He’s still obviously controling the tribe. It was a smart move to be loyal to his allies again after last week. He had no reason to be in an alliance with Tom (who would be competition) and Candice (who he can’t trust). I guess he too doesn’t mind the low numbers because he hopes that Coach, or Parvati or Tyson sides with his alliance when the tribes merge. Once again, I see why, but it’s a too dangerous assumption to base your strategy on that.
Rupert Boneham
Rupert is a bonehead. Still doesn’t understand anything to that game, and what he did to Jerri was just plain wrong.
Tom Westman (voted out)
I’m sorry, people can say what they want, it was the right choice to vote Tom out. And no the “they should keep the stronger ones” argument is not a valid one. How many challenges did Tom help win? And his behavior with James is very condescending and insulting, not classy at all. Classy would have been not insulting James.
The different teams and alliances:
-Amanda, James, Rupert, JT
-Colby
-Candice.
Villains 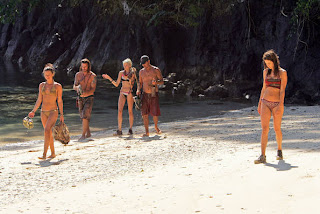 The showdown between Russell and Boston Rob is coming… I can’t wait. Of course, that means that they have to go to tribal for that, which doesn’t seem likely at all (but we all know they will sooner or later).
Benjamin “Coach” Wade
Coach is a very interesting character. My previous favorite pasttime was to mock him, but now (since last week?) I want to try to understand him better. Sure, I still think he’s very lame but hilarious with the feather in the ear, the jacket over the shoulder, the constant quotes and much more. But I did some research, and he’s not that full of shit. He’s really a conductor, and more important he really did kayak 6,000 miles or so about 10 years ago (which doesn’t mean that there are cannibalistic pygmies in Peru). I guess that all in all, he’s very delusional and he built himself this world of chevalry and adventure and he may be losing track of what’s real and what’s not in it. But this is important for this week, as his plede of allegiance to Russell was serious business to Coach. This is how he works you see. He is aware that he’s on the outs, he’d like to be Boston Rob’s ally, but Boston Rob only wants the cool kids around him, so he feels alone, and when somebody tells him that they want him, he will ally with them right away (a little bit like Ben on Lost… that’s to make it up with my lack of report on Lost this week, I’ll try to catch up next week), and he’ll be loyal to them (even if that sends him home, which it certainly will.
Courtney Yates
No Courtney this week? I’m sad. And she really needs to compete in more challenges. Seriously. I hope her lack of airtime means that she’ll last long and will be more prominent in the second half of the season, the first half being devoted to those who won’t last long, namely the Heroes as well as Rob and/or Russell.
Danielle DiLorenzo
She must have taken a break this week, I didn’t see her at all. Are contestants allowed to leave the game for a few days like that?
Jerri Manthey
Not much of her either this week except at the challenge…
Parvati Shallow
Her little exchange with Russell was very interesting, especially because it was quite honest and seems to prefigure a big showdown between them later this season, like they’ll be the cause of many people boots, and then they’ll annihilate each other or something like that.
Rob “Boston Rob” Mariano
Not much of Rob either this week, except for all the comments that imply the big showdown of this beginning of season. And Rob admitted something this week that may bite him in the ass very soon. He never played with immunity idols and he doesn’t seem to understand how they work too well: “if Russell has the idol, we all vote against him” Yes, smart move, and then Russell votes against you, plays the idol and guess who’s out of the game?
Russell Hantz
OK, for the past few weeks I was wondering whether Russell could really play as well against people that know how to play this game, and it seems that he does, all he needed was to find his magic potion, namely an hidden immunity idol. I often think that showing off your idol the way he does is way too risky, but he does it in such a way that people feel compelled to ally themselves with him. I guess they must be thinking “Wow, he’s telling me he has the idol, he must really be trusting me, and together with this idol we’ll be in control of the tribe” or something like that. Of course, he has to be very careful to whom he shows it (he was pretty careless with that last time), but Coach was the perfect choice as explained a couple of paragraphs earlier.
Sandra Diaz-Twine

I don’t really have anything to say about Sandra either this week.

Tyson Apostol
OK, it is very frustrating to see so little of Tyson, and I hope that, just like with Courtney, there is an insteresting story coming with him later this season. Also, it’s obvious that he’s playing as under the radar as he can and with good reason. I suspect that people like Sandra and Rob haven’t really seen his season (that would explain why Rob seems to not totally despise Coach) so Tyson is right to play that way. In a “secret scene” on cbs.com he even jokes that he is this season’s Amber (staying in Rob’s shadow the whole time and winning it all in the end?), also he also jokes that Jerri’s trying to be this season’s Amber too, while I thought Jerri was not with Rob… Mmmmm…
About challenges, I’m still not sure if Tyson is not as in shape as he used to be or if he’s “under the radar” in challenges too, every challenge he seems to be weaker in contests, but still in the reward challenge, he managed to score one of the two points of his team, and that was awesome of him (yeah, I wrote it, almost couldn’t this week).
Still, I gotta admit that I don’t like the fact that he allied with Rob, he can’t hope to go too far in this game with such an ally.
Alliances:
-Russell, Parvati.
-Russell, Coach.
-Russell, Danielle.
(the question being whether Parvati, Coach and Danielle are together or not)
-Coach, Jerri ?
-Rob, Courtney, Tyson, Sandra (and Jerri ?)
Next Week:
The showdown between Russell and Boston Rob seems to be happening next week (which actually going to be in two weeks), I say “Bring it on” as it may be one of the highlights of this season…
Next person voted out:
If the Heroes go, Colby is gone (unless James doesn’t get better, that could save Colby).
If the Villains go, Rob or Russell will be voted out and it’s gonna be bloody.

Merge prediction:
Back to something similar to my previous prediction for the heroes: Amanda, JT, Rupert, Candice for the Heroes.
For the villains, it’ll all depend on who’s next, and I have the feeling that Rob won’t learn fast enough how immuniy idols work: Russell, Parvati, Danielle, Coach, Tyson, Jerri, Courtney, Sandra.
I’m always assuming they’ll merge at 12 people, but really I have no idea.