Every episode really delivers something special this season. A catfight this week!!! Wow… And I’m sure that a lot of it was cut… Oh and the end of Amanda’s rule as the longest lasting Survivor. 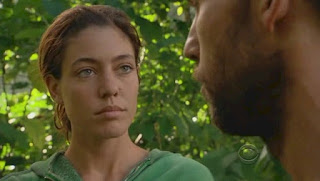 Amanda Kimmel voted out.
Wow, I didn’t think I was going to write this someday. No, that’s not true, it has been previous obvious for a few episodes that Amanda didn’t stand a chance to make it to the finale this time. As she stated herself in her final words, she made too many mistakes this season, and left with people like Colby and Rupert that just can’t play the game, and Candice that has wanted to jump ship since the very beginning of the season, Amanda was basically left alone. Still, I think that she was not aggressive enough and didn’t take the initiative to take matters into her own hands. Had she done it, she could have controlled the game. But no, she’s a follower and this is why she let JT give the idol to Russell, this is why she gave the clue back to Danielle when Colby stupidly asked her to, this is why she didn’t try hard enough to align with Parvati, and this is why she’ll never ever win Survivor.
Candice Woodcock
That’s it. We all thought Sandra was the one that was going to “jump ship” but no, it was Candice. Well, this is not surprising at all. First, I still wonder why she had been cast as a Hero, the only thing we remember of her in her first season was that she betrayed her team, and guess what for she’ll be remembered this time around? For betraying her team again. Why did she do that? That doesn’t make sense. Had she stuck with the Heroes, Sandra would have come with them and Candice was final four and possibly more. Now, she’s just a sitting duck, as there is no way Russell will keep her to the final three, and she will have no one to turn to when her head will be on the chopping block, no one. You screwed it Candice… I know, it was just another effect of the Russell seed, but she screwed it. How on Earth could she believe Russell after the way he played the whole Hero team? She’s gone soon, and she won’t be missed.
Colby Donaldson
Did I already mention that Colby was useless and was an idiot. He still thinks that this game is about winning challenges. See how excited he is every time he wins one, and how bummed he is when he loses. All the rest? He simply doesn’t care about, or even worse, doesn’t understand at all. What happened at the reward was really painful to watch (I mean, the Colby part, not the catfight part). Not once he tried to find the clue for the idol, all he cared about was watching the film. And when Amanda (his teammate) starting fighting with Danielle (he enemy) over the clue, what did he do? First, he did nothing, he just kept on watching the film and when he finally stepped in it was to order Amanda to give the clue back to Danielle, and sign Amanda’s death warrant in the process (as well as his). Why is that? I guess it’s because of his stupid sense of honor, chilvary bullshit that will never get you anywhere on Survivor. Stupid stupid man…
Courtney Yates
What? An entry about Courtney? But she’s been voted out weeks ago? Yes, but as she gets more airtime now that she’s in the jury than when she was in the game and she was the most interesting thing at tribal council this week… Seriously, if you don’t find her hilarious, you have to be a robot.Danielle DiLorenzo
I still can’t figure out if she’s playing well or not. Yeah, she made the right alliances and a bunch of right moves, she hasn’t been targeted once. But how much is she being proactive and how much is she riding Russell’s and Parvati’s coattails? I’m not sure. Example: she finds a clue for the idol and let’s Russell find it… Despite all of that, she’s put herself in a very good position. She has more and more chances to make it to the finale, and she could even win against pretty much anybody except maybe Parvati or Sandra.
Jerri Manthey
Jerri’s game is surprisingly not too bad either. Saying she’s playing well would be a lie, but if Parvati and Russell start gunning at each other, with Sandra stuck in the middle, Jerri has a good chance to make it to the final three, and as she has played quite under the radar and hasn’t really made many enemies (wow, I can’t believe I’m writing this about her) she has some good chances to win. I know, this is crazy, not only she’s quite likeable this season, but she also has good chances to win at this point of the game. But making it to the final three and winning (i.e. sitting there with the right persons) will mostly require luck, and who wants to base their game on luck?

She was not very present this week, I guess it’s because she was on the spot a lot last week, and will most likely be next week, as the outcome of her “blindsiding” Russell will play out then. Next week may be a very tense episode, and I have the feeling that either Parvati or Russell will go home, but more on that next week.
Rupert Boneham
All Rupert needed to start playing the game was Sandra I guess. Still, it’s too little too late, and his candid comments at tribal won’t help, he’ll be gone very soon.
Russell Hantz
Russell is pissed that Parvati hid from him the fact that she had an idol. And when Russell is pissed at somebody he wants them out. But Russell is smart and he realized that gunning for Parvati then would be a terrible mistake as it would give the advantage back to the Heroes, especially because he sensed that Sandra was this close to go with them. So he waited a little bit to exert his vengeance, as he first needed to weaken the Heroes beyond any possible recovery, and this is what he did when he planted his Russell seed in Candice’s mind and ousting Amanda in the process. Now it’s most likely that he will go after Parvati. Will he get her or will she get him? No idea. But it’s interesting to see that he didn’t feel safe at this tribal council and felt that he had to play the idol he just found, when he would have been smarter to keep it for later. In any case, Russell has, once again, no chance to win this game whatsoever as he basically alienates every single person he sends to the jury.
Sandra Diaz-Twine
Sandra is an amazing and terrible player at the same time. She’s amazing because she always manages to dodge every single bullet that comes at her, and her strategy to always align with the majority has worked once, so why not twice. Still, this is an extremely dangerous strategy to have when you’re in her current position (number five in the pecking order of five). Yes her spot in the final five is almost a no brainer, but she has to take action in a more proactive way if she wants to go beyond than that. And she could have amny times, especially last week, but every time she doesn’t dare going all the way. Same thing this week, although I don’t think we can blame her this week, as I’m pretty sure that what happened is that she knew that Candice had jumped ship, so it was indeed pointless and even suicidal on her part to go against the Villains at this point. Still, she failed making Candice realize that they both had a much better chance to win this game being on the side of people like Rupert and Colby than with people like Parvati and Danielle. Still, if Sandra can make it to the end, she could easily win again.
Next Week:
Did you notice how the preview didn’t show one single Hero. Well, it makes sense, their stint at this game his over, and now make room for the final showdown…
Next person voted out:
Russell or Parvati? I think the time of one of them has come. Also, apparently there are two votes next week (to speed up the Heroes culling and leave room for more interesting things?) so I guess one of the Heroes is going too, Rupert because he’s starting to get a clue? Or Candice because she’s totally unreliable and every one knows it?

Chances of winning:
-Candice: Not too bad if she makes it to the end, but her chances to make it to the end are very weak.
-Colby: None.
-Danielle: Not bad.
-Jerri: Totally depends on whom she’ll be sitting next to at the final tribal.
-Parvati: Pretty good.
-Rupert: Slim to none.
-Russell: None whatsoever.
-Sandra: Pretty good.