The title pretty much says it all.

Still, I may need to develop a little.

Where does this come from?

Well, there are several reasons. I guess it starts with a wish to reconnect with nature more… There’s definitely that… Also, I write, I take pictures, I read, and that’s great, I love doing all that… but for a few years now, I’ve also wanted to try doing things with my hands, something more material, more physical. Something I’ve never really done before. And yes, that mostly comes from seeing the amazing things people do (art or renovations alike) all around the islands where I live. Also, meeting Patrick Lydon and Suhee Kang was a big catalyst for that decision. It’d be too long to explain, just read what they have to say on their site(s), you’ll understand:

Oh, and there’s also the fact that, last summer, we bought a house with a tiny yard (crazy small by European standards, but I guess not that small by Japanese standards? by US  standards, I’m not even sure it qualifies as a yard at all).
All those reasons, and maybe more (teaching my kids certain values are a big part of the thing too) I have decided to start a garden in my small yard… and to make it a natural garden.
And as the title says, I have no idea what I’m doing!
I just got some basic advice from Patrick and I’m starting from there. I’ll read and learn as we go. Mistakes will be made. Disasters will happen. Let’s hope some good results will too.

And I decided to blog about it because why not? Blogging is what I do.
This is definitely not a “how to” thing. It may even be a” how not to”.
We’ll see…
And let’s start with the yard.

As I said it’s pretty small, and it’s divided in two parts (well three… sort of…), and a large chunk of it is used as a scooter parking lot at the moment.

See, our new house is quite peculiar. It is one house, but it’s divided into two completely separated and independent living sections (basically two apartments in one house). From what I understand, the previous owners used to live upstairs, but the grandmother of the family lived independently downstairs. They left the house a few years ago, the bottom floor was left unoccupied for many years, but the top floor was rented out to a family of four.

Since buying the house and moving in, we’ve lived downstairs as the family “came with the house”. Apparently we don’t own them though, but they will continue to live there for a couple more years or so, until both daughters graduate from college (if I’m correct, one is graduating now, the younger one should do it in one or two years). They will remain our tenants in the meantime.

It’s all good for the moment (I mean, they pay us rent).

There is one small problem though.. They own three scooters and they are using the larger part of the yard to park them.

So, long story short, until they move out, the space available for gardening is very very small, two or three square meters really.

I hope it’s enough to learn about this whole gardening thing. Well, it will have to be.

Last Sunday was sunny and almost warm (yes, Spring really is coming), so we decided to start the garden. The previous day we went to the store and bought a bunch of things, and a little after lunch we got to it. The kids were super excited and it was good for the four of us to do something outdoorsy together (feels like we haven’t in months – damn you Winter!)

So here is what we decided to start with:

First, using the hand shovels and rake, we dug through the ground and turn it around and gathered it to make a little mound/plateau in the middle. That soil hadn’t been used in many years and was pretty compact. Also, we can’t dig pretty deep as there are pipes and tubes and we’re not too sure what they are (buying an old house always reserves us lots of surprises). Also, as you can see on the first picture, there are two “hatches” for access to water I guess. They reduce considerably the available area.

Next, we put some soil in a bucket, and dumped most of the seeds in it, mixing the whole thing.
Our first mistake must have happened right then (we’ll see), we definitely put way too many seeds (several dozens, nearing a hundred?) for such a tiny area. I count on “natural competition” to see which seed will survive. And I’ll get involved a little bit if too many things start growing. I’ll have to make some tough decisions and kill some of the plants – or rather and if possible, displace them.
Especially, it may not have been a good idea to put in daikon. Those things grow pretty big.

A few things ended in pots too. 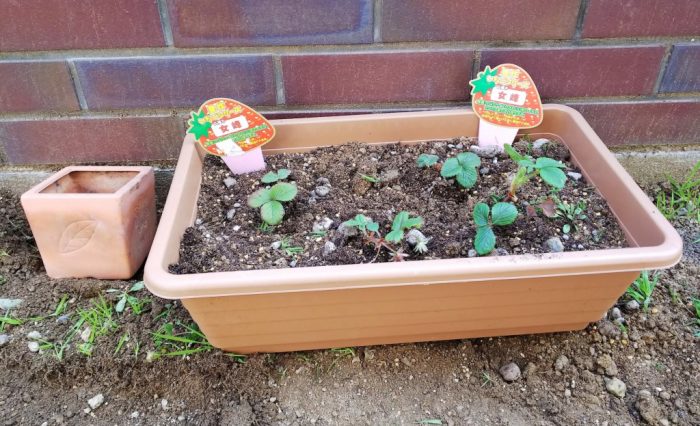 The strawberries, partly because they didn’t come as seeds but as saplings, and we don’t want to run the risk to lose them (because, hey, those are strawberries). Partly because they’re my wife’s project and she’s not completely sold on the whole “natural garden” thing. She has nothing against it, but she still finds it a bit too “weird.” But the main reason really was to be able to move them if necessary.

For the lavender, the situation is a little different. See, we have a cat problem in our neighborhood. Like in too many neighborhoods in Japan, there are a bit too many stray cats, as well as simply outside cats. And they are a nuisance, almost a pest.

Yes, I know, you love cats, they’re cute and all… And also, they kill birds, there are almost no birds in the neighborhood, just a few crows who keep their distances. Sure, our neighborhood is still pretty urban, but an “ecosystem” with no birds and too many predators is not well balanced. Also, they have the tendency to use people’s backyards as their toilet. It’s not only gross, it’s a sanitary hazard. I want my kids to be able to play in their yard, I don’t want to have to tell them that sorry they can’t play because there’s cat poop in some corners.

Seriously people, if you have cats, keep them in your house. Why do you think it’s not OK to have a dog roaming unsupervised in a neighborhood, but letting a cat do it is no problem? Personally, I call that hypocrisy! Having an outside cat, means you feel good about yourself “taking care” of a cat, but you’re simply not taking responsibility for the damage and nuisance they may cause in their neighborhoods

I was tempted to call the “Prefectural cat control” (I’ve heard there is such a thing in my town), but see, I’m being nice. Instead I looked up some plants that cats strongly dislike and installed them in my yard. Lavender was the easiest to find and the one I’m the most familiar with (I think some of the flowers my wife intend to plant soon fall under that category). And I planted it in pots to try to locate the best spots to put them for maximum efficiency against cats.

Here are a few more pots: 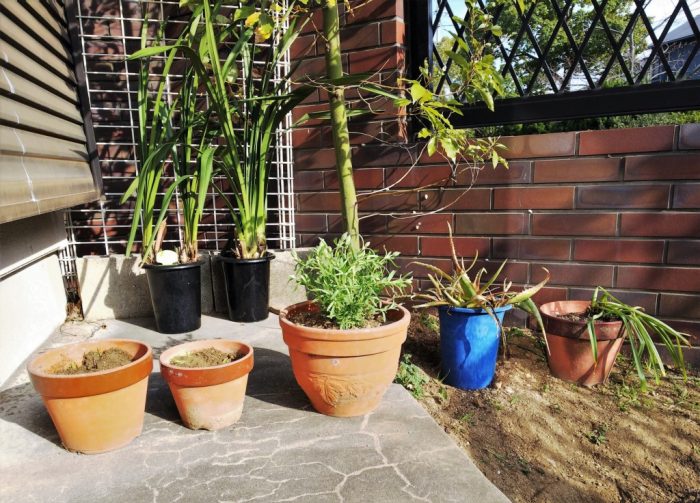 From right to left:

And this is what it all looks like at the end of the first day:

The first challenge was the following day, when we had a downpour of an intensity I hadn’t seen since the last typhoon. The water seems to have drained pretty well though. 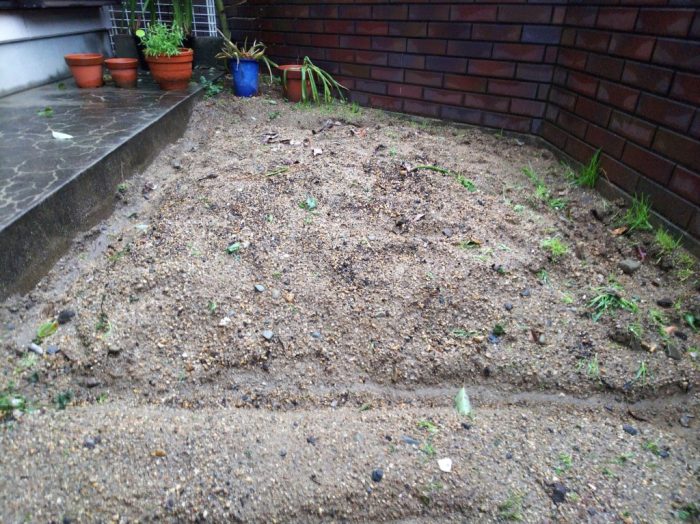 I have the feeling that I need to cover the patch with branches and such, but I don’t have any handy at the moment. I’m not too afraid of birds eating the seeds (as there are almost no birds 🙁 ), rather the cats using all that turned soil as a toilet if the lavender is not effective.

Ok, that’s all for this first episode of my gardening adventures.

Stay tuned, and in the meantime, if you have personal experience with gardening, especially natural gardening, please feel free to drop me a line for advice, random comment and suggested readings and more.

2 thoughts on “So, I’ve just started a natural garden… and I have no idea what I’m doing…”