The prompt for this second week of Inktober 52 is Shadow.

For some reason, the drawing I made was the first thing that came to mind. So, well, I had to try doing it.

Not the most cheerful drawing, but for some reason, it had to be this.

I thought it was going to be a bit of a challenge as the whole thing is just a lot of different shades of grey, but I think the result is not too bad. I’m especially happy to have managed to do the steps of the stairs the way I meant to (with the edge being white and not a drawn line).

Of course, the perspective is all wrong, but it’s slowly becoming a bit of my trademark I’m afraid. I really need to learn perspective. 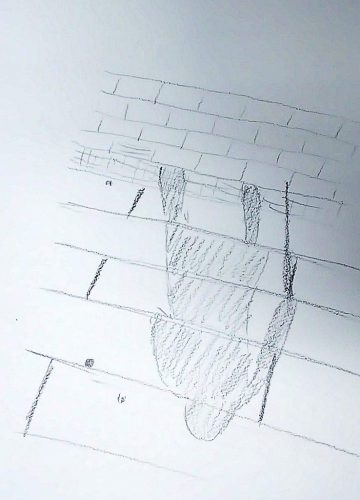 The pencil draft is not that interesting,
but I guess it kinda has become a feature of my Inktober posts… 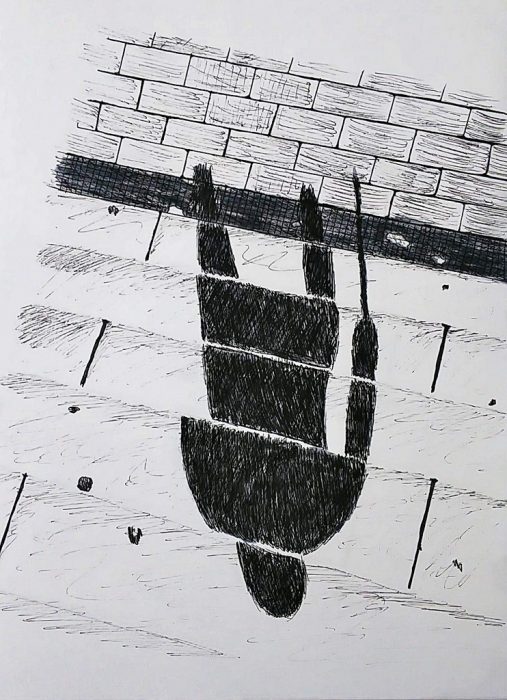 As for what it represents, if you’re not sure, this is an “A Bomb shadow” from Hiroshima.
When the bomb was dropped in 1945, the heat of the blast was so intense that it instantly bleached the stone of buildings in various places… However, when people or objects were in the way, they screened the stone from the blast, and their shadow was permanently etched in the stone. Of course, those people died instantly or within minutes. Contrarily to popular belief, those victims were not vaporized and those shadows are not their “remains” (their dead bodies were found). The shadow is actually the part of the stone that was shielded from the blast and not bleached.

Hopefully, next week’s prompt will inspire me something lighter and happier.