Yes, why wait until they can walk and speak to give them sexist toys when you can do it when they’re still babies?

So, the other day, at the toy store, I found this: 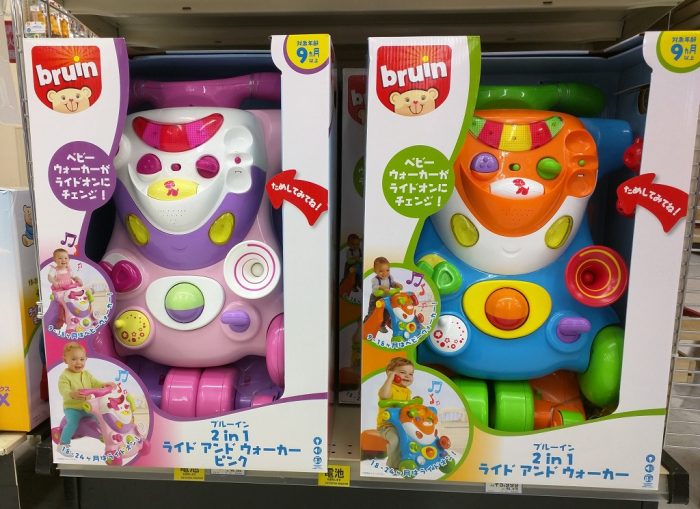 Sure, it’s in Japanese, but do I really need to explain?

So, this toy is basically a toy to help babies and toddler learn how to stand, and then walk, as well as a bunch of other things (you can turn things, pull things, press things, I’m sure it makes noises too, you get it). It’s for kids who are 9 months old and older. On the left you have the version for girls, and on the right, the version for boys.

First of all, why exactly do we need gendered toys for children that are less than one year old in the first place? I just don’t get it.

Anyhow, let’s say it’s relevant and let’s compare them a bit. Do you see the problem?

The toy for girls is mostly pink and purple, and every other color that is not pink or purple (or white) is a pastel color. On the other side, the toy for boys is very colorful, with all kinds of colors.

So, nothing new here, right?

Well, yes, apparently girls are allowed only one or two colors and boys are allowed as many as they want, we all know that. And I mean, it’s bad enough when we’re dealing with young kids, but here, we’re talking about babies about to become toddlers. They’re at a crucial age in their life, they’re starting to be mobile, soon to be walking, and as soon as they can, they start discovering the world and understanding what’s around them, including colors. For example, one of my 16 months old son’s favorite activities now, is pointing at his color book so that I tell him the names of the colors. This age – once they’ve learned how to walk – really is the age, when the brain starts focusing on learning… well… about pretty much everything that surrounds them. It’s the first time in their life when they focus on the world, and not themselves.

Limiting the colors a kid can interact with at that age is not just wrong, it’s criminal. I’m sure it stunts the kid’s imagination in many ways.

You see those kinds of things over and over with girl toys, but this example may be one of the worst.

6 thoughts on “Sexist Toys for Babies and Toddlers”