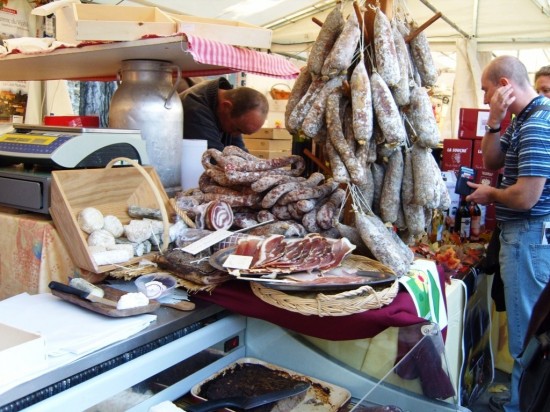 Saucisson (and to a lesser extent dried-up ham) is, in my opinion, one of the most important elements of French cuisine. Strangely foreigners rarely mention it when they think of French cuisine. I assume that it is because they simply have no idea what it is, how to eat it, or are even too squeamish to dare buying some.

So if you’re in France and never had saucisson, or during your next trip to France, do me and yourself a favor, just buy some (you can find it in any grocery store), keep an open mind, and have some.

How do you eat it? You’re asking me?

You grab it, you grab a knife, you cut a slice, you peel the slice and you eat it.

(When I lived in the US, Saucisson was the number one thing along with Cheese, that I missed from France and I would gorge myself with it every time I was back to the homeland. Now, I don’t miss it just yet – probably because contrarily to the US, Japan is not a culinary wasteland – but I suspect it’s just a matter of weeks, after all, I already miss cheese)