About a year ago, I was ready to return to France for Christmas and New Year’s. As it was Winter, and it rained for pretty much the entire two weeks I was there, I didn’t do much (I mean, apart from being home and with my family) but eat.

After all, food is one of the best things France has to offer, especially in winter on rainy days.

I have posted a few pictures of more or less traditional French dishes here, but today, it’s not exactly a traditional dish.

What it is though, is an example of how varied the food can be in France, and always delicious of course.

When I lived in North America, one thing that baffled me was the fact that Americans know just a handful of meats (beef, pork, chicken and turkey, am I missing any?), and it’s not much better in Japan as Japanese people started eating meat under American influence.

So, something like what follows is completely unheard of there: 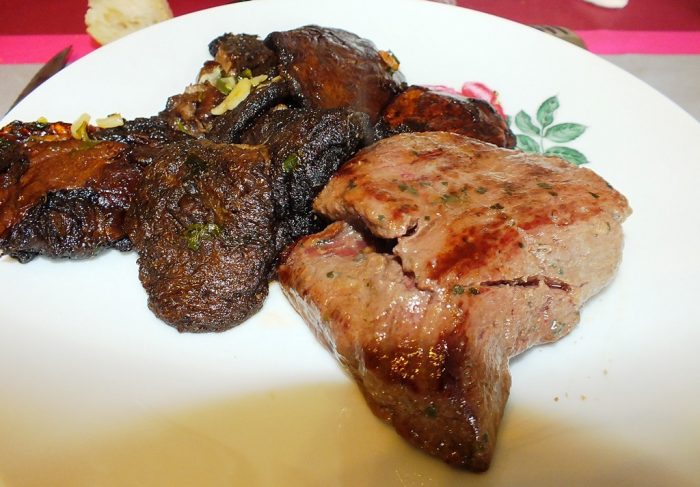 Yes, this is an ostrich steak, and honestly, while it’s not a meat that one eats on a regular basis, and it can be pretty hard to find at times, I think ostrich is one of my favorite meats (probably only topped by duck), and no, it doesn’t taste like chicken. By the way, I’ve always found this expression completely silly (and very representative of the lack of culinary education, which leads to underdeveloped taste-buds in North America). Nothing tastes like chicken! Not even chicken, as different types of chickens will taste different from each other, and even different parts of the same animal will have different tastes.

So ostrich tastes like ostrich, and it tastes delicious.

You may be wondering what is the thing with the ostrich steak, and it’s a mushroom that’s possibly the most delicious mushroom in the world, and while it exists in many places in the world, it seems to be the most common in South West France.

Now, I have a problem with it. I have no idea of its name in English. In France, we commonly call it “cèpe“, sometimes “bolet.” Its scientific Latin name is Boletus Edulis. Looking up online, I’ve found “cep“, “penny bun” and “porcini” (the latter sounds more Italian than English), but I’m familiar with none of them. I assume that cep is just a translation from French and penny bun sounds British (and I’m not always familiar with the intricacies of British English). It probably doesn’t have a common name in the US, as it is not eaten to my knowledge (fools!).

Anyways, ceps are the best mushrooms on Earth (with truffles, but contrarily to truffles, they’re affordable, and/or easy to find and pick up in the woods), and have some if you never did and have the opportunity.