Today’s prompt for Inktober 2019 is Mindless!

My first thought was Donald Trump. Who else?

But I had already drawn him last year for Weak, I won’t give him the honor to draw him twice.

And I couldn’t really think of anything else for a while.

A robot? A robot doesn’t have a mind, so it’s mindless, right? Meh.

A French one? You probably won’t know them.

Then, Carrie Lam came to mind, but is she really mindless? Hard to tell what’s going on through her mind at the moment.

Someone else soon became the obvious choice. 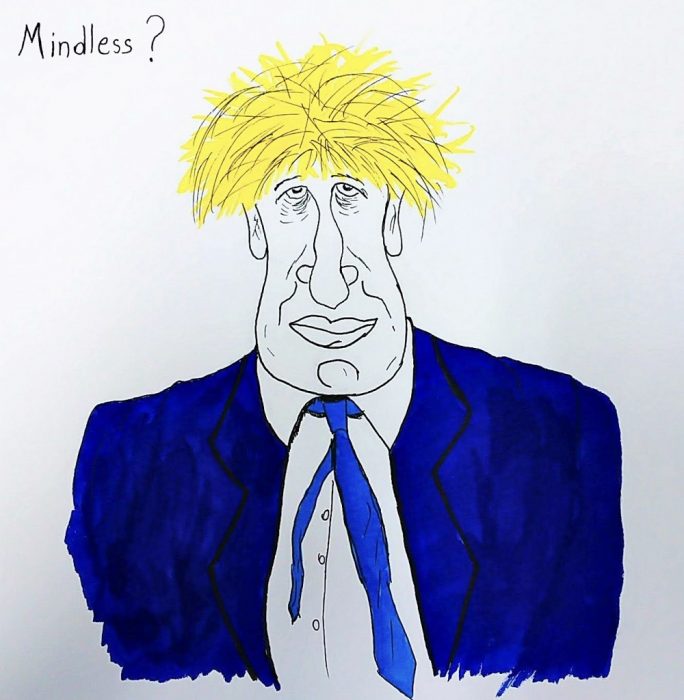 Do you recognize him? On the one hand, I’m pretty happy to have managed to draw such a caricature, on the other hand, not sure if he’s really recognizable.

So, yes, it’s Boris Johnson, the current Prime Minister of the United Kingdom (at least for now). And to give credit where credit is due, this drawing was as much inspired by the real thing as it was by a drawing from Andrew Fyfe.

In the previous post, I mentioned using more color this year, but maybe I should stick to a stroke here and there, and not much more. That blue is a bit too intense and distracting. However, I couldn’t have this drawing entirely in black and white, the yellow hair is a big part of his appearance.

Which leads us to the following point: Is he really mindless? Actually I don’t think he is. I think most of his apparent foolishness is a calculated act so that we underestimate him, or rather that allows him to get away with a lot.

This piece by John Oliver explains the whole deal perfectly in my opinion:

So, yeah, he’s not really mindless. However, acting this way while being Prime Minister, thinking that he’ll get away with his incompetence in the eyes of whoever (the EU?) in such Brexit times is indeed completely mindless, as his autocratic failed attempt to shut down the Parliament has shown us.