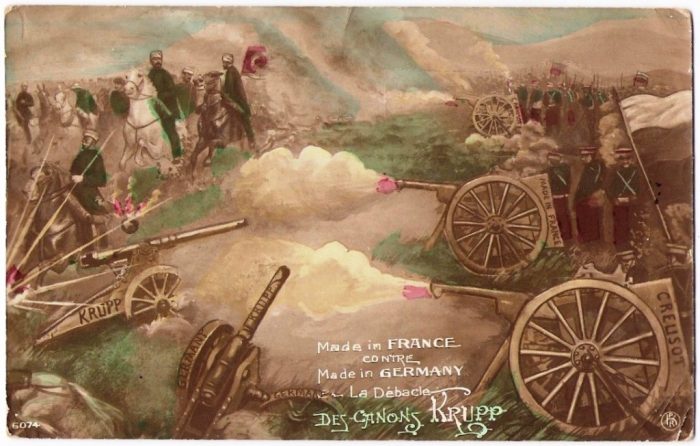 I don’t think I need to translate, but just in case, it says:

“Made in France vs Made in Germany – the Krupp cannons debacle”

I find this postcard very interesting for several reasons.

First I had no idea that the expression “made in” used in English in the French language was already a thing back then (I always assumed it was a post World War Two thing). Then, it is often said – with a good reason – that World War One was the first technological war, and I think this is the first time (chronologically speaking) I see war propaganda based on technology and even brand names rather than based on the people’s courage or weaknesses.

The whole thing is also quite ironic as Krupp cannons reputation has made it to this day, while I didn’t know anything about the Creusot ones. But this simply could be because, one was taken for granted and the other one made quite an impression in the national psyche. Or even simply because Krupp still exists and is still a quite famous German brand, while Creusot has disappeared (wikipedia informs me that it became Schneider after World War Two, and while I knew the brand in my childhood, I haven’t heard about it in years – apparently it’s still around but has changed quite a lot)