That’s it. I’m done. I managed to finish the 31 drawings of Inktober. It took me about two months, but for me, the challenge never was drawing 31 things in 31 days. It simply was about drawing again after an interruption of several decades.

And before you read any further, I invite you to (re)read the post where I explain all of this.

A few thoughts now that I’ve actually done it

First, while I don’t like to pat myself in the back (at least not publicly) I’m pretty proud that I managed to do that.

I surprised myself that I was able to make 31 drawings at all.

Sometimes it was fun, sometimes frustrating, most times exciting.

I also discovered that drawing had a serious soothing effect on me and was one of the best stress-relievers I’ve tried in recent years.

I discovered a few things, mostly that I could draw much better than I thought I could.

Also not really having a style, it was fun to experiment with different styles. And while my skills and techniques are still very low, I saw myself improving and learning new things almost every day.

I started that whole thing with the slogan “I can’t draw, so I joined Inktober!”
To which some people responded that I could draw indeed.
I’m still not sure about that. I can reproduce and copy – most of my drawings are from photographs or other drawings. However, for me, being able to draw is to be able to draw from scratch, to be able to put on paper in a satisfying manner the images that are in my mind.
I’m still very far from being able to do that.

A few reflections on some particular drawings

You can see all the drawings at once there:

And a few thoughts about each drawing here:

1 – Poisonous: As it was the first drawing on the list, I didn’t try to be original nor imaginative. I just wanted to get started. So a snake it was going to be. Also, when I was a kid, I always loved drawing animals. As I wanted to draw something good (I still hadn’t completely removed the “oh my god, people are going to look at my drawings, I don’t want to embarrass myself” from my mind), I drew from a picture. It came out pretty nicely and I’m glad it did. Otherwise, I may have given up. I almost did a few times during the first days (from lack of self-confidence) and about halfway through (from lack of being able to keep the pace).

2 – Tranquil: First drawing from scratch (the only one?). I didn’t dare to go more detailed or more realistic, I wouldn’t have been able to do it. Overall, I think it could have been a very fun drawing if I could draw from scratch.

3 – Roasted: First real challenging drawing. I’m glad I kinda succeeded. I wish I could have made it more detailed. It needs more shades, and that’s something I still struggle with as you’ll see on many drawings.

4 – Spell: Insects may be one of the things I have the easiest time drawing. Still, I find the bee a bit too “stiff” or too flat or something. I like how I managed to do the bee’s stripes, though.

5 – Chicken: Mostly from lack of time, I tried to draw a chicken in as few strokes as possible. I’m actually pretty glad how it turned out. I also like the gray strokes along with the black ones. It was a random attempt. It was one of my favorite drawings somehow.

6 – Drooling: Nothing much to say about it. I inspired myself not from one, but two Pokemon for this. Can you tell which ones?

7 – Exhausted: I wish the drawing could be better, but drawing humans is not something I’m comfortable with yet and probably never will.

8 – Star: I started with a normal star, but meh… Then, I thought of doing the Death Star, but I was afraid I wouldn’t have the time to do a decent job. Then, the homage to Bowie imposed itself. I tried to draw the geometric forms without a ruler or anything. I’m glad how it turned out.

9 – Precious: I really liked the first drawing, but was too light. It had to be dark, in a cave or something. However, the way I darkened the hand is not so great and I didn’t dare to touch the face after that, so the lighting is a bit messed up (as well as the hand).

10 – Flowing: Originally, I had no idea what to draw. A river? Hair? Something else. My first attempt was pretty shitty and half-assed (pardon my French), but then I decided to go the more abstract route and just try my different pens. It turned out better than I was expecting.

11 – Cruel: I drew that, mostly because it was easy. It turns out to be one of my favorite drawings. And I’m not the only one apparently; I posted a few of my drawings on Reddit. They all got just a handful of upvotes, except for this one that got more than 200 and was even on top of the Inktober subreddit for a certain number of hours. It reminded me that good drawings don’t have to be complex. Conveying emotions and telling a story matter as much (just like with any other artistic medium really).

12- Whale: This is my six-year-old self expressing himself there. I loved drawing whales as a kid, not sure why. I used to draw them like this. Why change?

13 – Guarded: Not much to say. Wasn’t sure what to draw, googled it, stumbled upon something similar.

14 – Clock: Another very simple drawing that I like, but it didn’t meet the audience that I hoped it would. It’s the Doomsday Clock, by the way, but I guess people didn’t see that. Another “lesson” (nothing too revolutionary): sometimes the creations you like are not the ones people like.

15 – Weak: First I wasn’t too happy with the drawing. I hoped I could have done better and less “gross”; but actually “gross” is perfectly fitting and pretty much what I tried to attain.

16 – Angular: I’m quite attracted to landscape drawing and never really tried before. This is pretty much my first attempt at it. Most likely not my last. Kinda ironic that this prompt inspired me to do a landscape.

18 – Bottle: What should I draw? A St-Émilion bottle or a message in a bottle? What about both. The result is not exactly what I envisioned (an original sketch was actually better), but I basically tried drawing something from a picture while making changes to it.

19 – Scorched: I’m quite proud of this one. Another one that’s quite simple, but once again I find it powerful, it tells something. I’m not sure why and what, but I feel that the black frame plays a part in it. Originally I only drew it because I wasn’t sure how to “end” the drawing, but now I can’t imagine the drawing without it. It’s somehow part of the story it tells. What story? Let’s go full “reader’s response” on that one, shall we?

20 – Breakable: Maybe you didn’t realize, but this one is a very personal one. This is a human humerus. I broke my left humerus four times as a teenager! No, this is not normal. I had a pretty rare condition called a bone cyst – which made one part of the bone quite breakable. I had to have some surgery. It’s been 30 years, haven’t broken it since. Knocking on wood.

22 – Expensive: Do I really need to elaborate? Actually a little bit, by “expensive” I mean overpriced (and overrated) here.

23 – Muddy: Nothing to add really, just tried to draw the stink spirit (actually a polluted river spirit) from Spirited Away.

24 – Chop: Even less inspiration than on day 21, also no time to try different things (I would have gone with pork chops otherwise).

25 – Prickly: I had a drought of inspiration over those days (I was also busier than usual, there may be a link). So I took the literal route again

26 – Stretch: I wanted to draw a superhero (I grew up reading Marvel Comics), I thought that was the perfect occasion. I chose a drawing from Jack Kirby as a model, partly as a homage, partly because his inking style is so unique and recognizable.

27 – Thunder: I had just done Mr. Fantastic, I couldn’t do Thor right after. So I tried an onomatopoeia, not really interesting. Then I remembered that maybe I should find inspiration from things around me, so another Japanese thing it is. It turned out better than I thought (and nobody seems to have noticed he’s missing an ear – yes, I only realized it once it was too late).

28 – Gift: There too, the Schtroumpf Farceur (apparently his English name is Jokey) came to me as the obvious choice. I tried to draw him from a model without much success. Then I found a Youtube video explaining how to draw him. I had forgotten that drawing “unrealistic” characters, especially in Franco-Belgian comic style, is basically drawing lots of circles, ovals and a few lines. A fascinating way to draw. I’m amazed that I managed to draw him so well. (if you compare with the original drawing, you’ll see that I didn’t just trace).

29 – Double: I tried something for the first time (in my life?) drawing with a real object as a model. As you can imagine turning 3D into 2D is not that easy. Could have been better, could have been worse.

30 – Jolt: Finally, I drew a Pokémon. Not sure why, but I had wanted to draw one since the beginning of this thing. Not super original, but eh…

31 – Slice: a bit disappointed that the last drawing isn’t better, but as often (and after messing up Gollum for “Precious”) I’m afraid to add more shade and darkness and to destroy the drawing in the process. I guess it’s going to be the next important step to learn.

I don’t exactly know, but what is sure is that this whole experiment reignited my love of drawing that had been extinguished in my teenage years, and now I feel that I’m old and mature enough to be able to just draw for myself, without comparing myself to others, without looking for approval or recognition and all that (the main reason why I stopped drawing all those years ago).

However, from now on, if I just decide to just “draw”, I know what’s gonna happen. Life is gonna happen, and I’ll be too busy to actually do it regularly (especially because I kinda have too many hobbies at the moment), and I’ll stop after a few days.

I may or may not blog about it, but I’ll most likely post some of them in a portfolio, on Instagram and such.

And I’ll finish this long post with a big thanks to Jake Parker (who started this whole Inktober thing) and Isabelle B. who pushed me to do it. 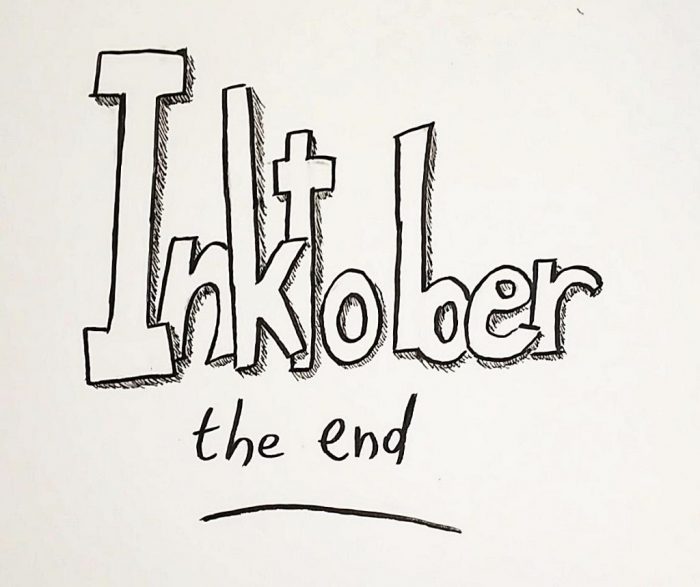