Every year, in October, all my social media timelines get covered with amazing drawings about all sorts of topics, and every single one of them is like a little dart piercing my heart and reminding me that I suck at drawing.

It could not be a big deal. Not being able to draw is not a big deal for many people. Also, there are many other things I can’t do, and when I see people doing them well, it doesn’t affect me one bit.
So, what is it with drawing in particular that makes me feel this particular way (let’s name the feeling, it’s jealousy, basically – sadness too)?

Well, we need to go back in time to my childhood in order to understand.

See, as a kid, I used to love drawing. I did it a lot. I was an “indoor” kid and two of my favorite hobbies were reading and drawing.
I loved drawing!
I did it a lot, and I was pretty good at it, much better than many other kids my age. Sure, I never imagined myself having some sort of artistic career. I kinda knew early on that being an artist as a job wasn’t for me. A social environment thing probably, while growing up in a lower-middle-class family, my parents themselves were from a rural and a working-class background respectively. In other words, culture and art weren’t too common in the household, or only the super mainstream thing. In other words, as far as culture and art are concerned, I’m pretty much an autodidact.

But, I’m starting to digress. My point is that, as a kid, I used to love drawing, without anything to push me or help me with it. It’s just something I did.

However, around age 10, something happened! My drawing skills just stopped improving.
I went from being a pretty good “artist” at age 10 to being a quite bad one at age 15, my style and my skills not having evolved nor improved a single bit. Things got worse as I moved on to high school, although, at this point, I had stopped trying. I still loved drawing, but really I had given up, I was just tracing in order to reproduce drawings I liked when stumbling upon them.

I tried to draw again at age 20. I could reproduce (without tracing this time) some drawings fine, but I was totally unable to create anything from scratch.
I tried a few techniques to go around that problem (like turning pictures into drawings, using tracing and such) but little by little the frustration of not being able to create what I wanted became too strong and I pretty much gave up drawing for good, especially because around the same time, I realized that I wasn’t as bad as I thought with writing, and I forked towards practicing that artistic skill instead.

Fast forward about 20 years, and Inktober 2018 is around the corner and a friend posts the official list on her Facebook page, and for some reason, stumbling upon it, all my frustrations of being a failed drawing artist resurfaced.

I had a small conversation about that with said friend, and she told me that her story with drawing wasn’t too different from mine, but for the past few years, she has practiced and practiced. Of course, she told me that she was still bad, and I know she isn’t, although she says that she has the same issue as I have: she can reproduce but not so much create. I don’t know if she’s being humble or not.

In any case, she told me that instead of being frustrated with Inktober, why don’t I embrace it and use it as a way to practice, and simply try.

For some reason, it resonated in me and she convinced me to do it.

It’s kind of a crazy idea, throwing myself out in the world with that hashtag next to my terrible drawings. Am I going to be mocked? Ridiculed? Or most likely, my drawings will be met with uneasy silence with people thinking “What the f*** is he doing? This is embarrassing!”

I started to make some drawings in advance, I’m not sure if I can draw one thing a day for a month, including some I don’t hate, and some that will indeed be embarrassing, and I’ll post them on my blog every day (or almost every day). I’m not sure if I’ll have the courage to post them on Instagram, Twitter and such, we’ll see.

When you see my drawings, please don’t lie and tell me that they’re great when they’re not. However, don’t tell me that they suck either, I know they do. I’m kinda doing this for myself. Not trying to become a professional artist, here. I’m not even trying to get likes on social media. I’m a little bit like the fat kid who one day starts running. He knows he will never make it to the Olympics and that’s not his goal. He’s doing it for himself. To feel better about himself, maybe healthier, or to – you know – just do it.

And you know what? Since I started drawing those little doodles a few days ago, I noticed something. They’re a great stress reliever, probably the most efficient one I’ve tried recently. So, if only for that, I think I’ll try to finish this Inktober thing, and who knows, maybe keep on drawing into November and beyond!

Oh and by the way, here is the list of themes/prompts for this year: 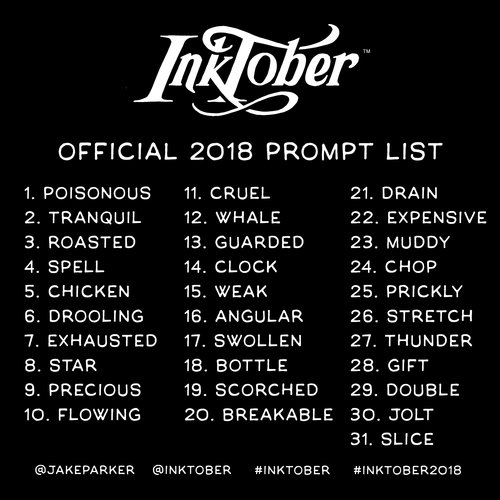