Today’s prompt for Inktober 2019 is Husky.

I always find polysemic prompts quite interesting (although, they don’t always translate well in foreign languages as I can see from friends and acquaintances who use French or Japanese official lists). I like how people come up with more diverse drawings than with more obvious – or should I say “easier” – prompts. Well, I also like obvious prompts, when many people will draw the same thing, but in very different ways.

Husky was actually pretty inspiring almost right away as I live right next to a giant “husk” that I see several times a week and that I love dearly.

Now, being able to draw it seemed like an impossible challenge, and I’m very surprised and pleased with the final result. Check it out:

The final drawing is not too different from the previous one. I’ve noticed that sometimes after erasing the pencil sketch, the final drawing looks a bit too… Not sure how to say… Too light? Too empty?…

Anyway, I realized that I don’t have to erase if I don’t want to, or I can simply erase some parts and not some others: 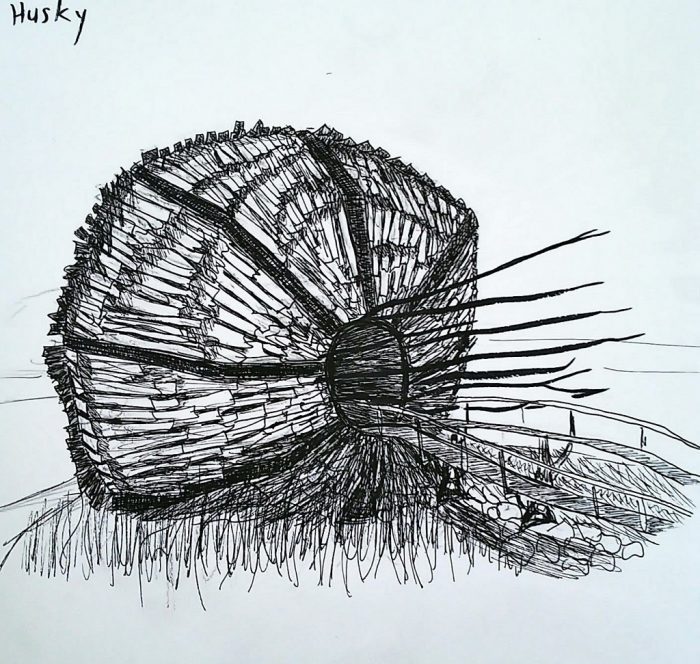 It’s not perfect, far from it, but it’s much better than I thought I could achieve, so it will do.

Oh, and as you may be wondering what this is, it’s an artwork called Beyond the Borders – The Ocean by Taiwanese artist Lin Shuenlong. It’s been sitting in Takamatsu Sunport for the past three years, as part of the Setouchi Triennale, and I hope it stays there for many more years.

You can see what it looks like for real there.

Also, if you want to know more, I invite you too read this interview I made of Mr. Lin last Spring:

See you tomorrow for something completely different.