Today’s Inktober drawing is one that I’ve been both looking forward to drawing, but also dreading since the 2019 prompt list was announced. It’s Ghost.
There are some prompts that are not very inspiring and some that give you too many ideas. This is one of the latter kind, however, pretty early on, I knew that a bunch of my drawings would be inspired by Game of Thrones. And when I saw that Ghost was the prompt a few days after Snow, they instantly connected in my mind. After Jon Snow, of course, I had to draw his friend & companion (no, he’s not a pet).

However, after my drawing of Jon Snow was far from being a success, I started having doubts about drawing Ghost. Would I succeed? Should I do a cartoonish version, as it’d be easier? My recent troubles, both with staying on track with schedule and drawing satisfying things (I’m not too happy with neither Treasure nor Tread – some of the previous ones are not too great either) kinda hurt the confidence I had recently acquired with the act of drawing.

Then, yesterday, another Ghost that I like very much was in the news, and I suddenly was very tempted to draw it, but I very quickly realized that it was going to be very very difficult, especially to do it quickly.

So, I decided to return to my original idea, try to draw Jon Snow’s Ghost and see what happens.

Note that I used this tutorial for it.

And the final touches: 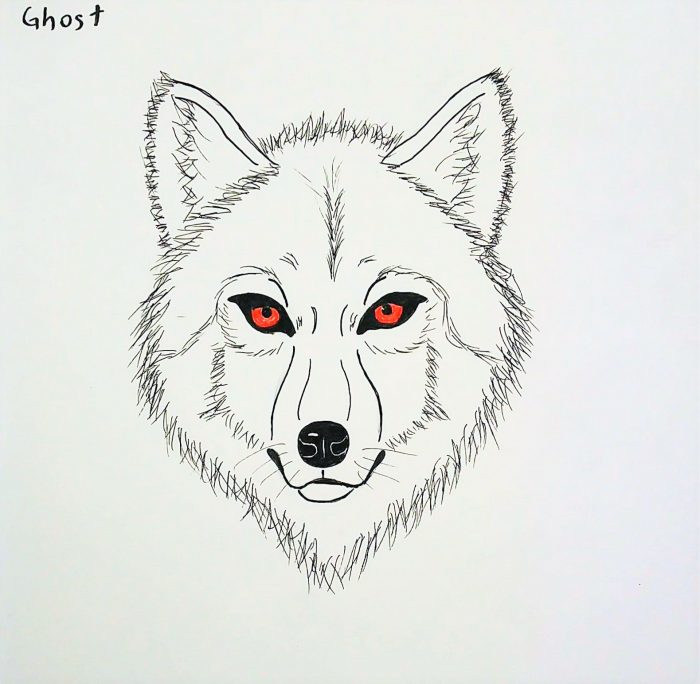 Hmmm… Not too bad…

Now don’t get me wrong, I could never do that without a tutorial.

The next drawing has me excited, I hope I can pull it out.