(asked by Carina from Portugal)

I’ve just discovered your blog and I’m finding your answers much more engaging than I was expecting to. In a matter of minutes you’ve managed to stimulate my curiosity concerning France in a way I didn’t think possible until this very moment and that, obviously, had as consequence an explosion of questions inside my mind, so I just couldn’t keep quiet, could I?

As a well behaved reader, instead of storming into asking a bunch of questions you could have already answered, I made a little research and, much to my amusement, I found this “I cheer for France only when they play teams I hate (Italy and Portugal mostly, because they can’t play without cheating)” – the word I searched for was “Portugal”, being that I am Portuguese and, therefore, was intending to ask something related to my country – anyway, what I find so amusing about your statement is that when it comes to football, most Portuguese people think exactly the same thing about the French team (oh! The irony!).

From what I know, in Portugal, this opinion applies only to football, but I couldn’t help but wonder if your statement extends to Portugal in general. What do French people think of Portugal/Portuguese people? Do they think of us, at all? I am particularly interested in this topic, because in the seventies France was flooded by Portuguese immigrants and I wonder if you think of us as an annoyance. The only thing I happen to know is that some Frenchmen claim that Portuguese women have mustaches! I had mixed feelings when I heard that, but mostly it made me laugh, seriously, what kind of women have they met?
Anyway, I really like it here, so I’ll pass by often.
Greetings,
Portuguese Woman Without A Mustache (shame, they are so in nowadays)

And first of all, thanks for the kind words.

One last thing about soccer, most French people actually don’t hate the Portugal team, I’m in a minority here.

So, concerning the Portuguese in France and their relationship with French people.

As some of my readers may not know, in the late 60’s, early 70’s a massive wave of immigrants from Portugal moved to France.

At the time Portugal was a dictatorship entangled in stupid wars with its former colonies (“stupid war”, yes I know, truism here). The country was closer to the 19th Century than to the 21st in terms of development. At the same time, France was basically at its best ever (I guess one can say that the five years between 1968 and 1973 were some pretty good years for the country). As a consequence, almost one million Portuguese decided to flee their country and move to France. That’s a huge number by the way; almost 10% of the population. Why not Spain? After all its was right next door. Mmm.. Ever heard of Franco? Leaving a dictatorship for another one would have been quite counterproductive don’t you think? 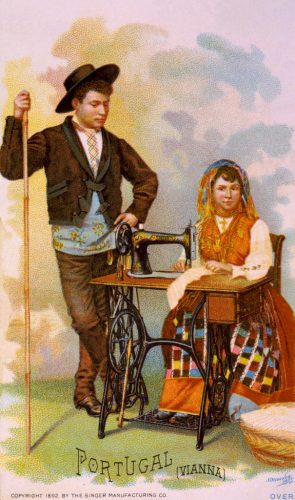 As a result, today, French people of Portuguese descent are the second largest minority in France after the Algerian minority.

Of course, during the first years, things were not easy. Just like for any minority just arriving in a country, integration can prove difficult. At first, racism against Portuguese people was strong. However, it faded quite fast (for the most part). Mostly because they were Europeans, so they got luckier than their African counterparts. And if there are a few Portuguese stereotypes, including women being very hairy, possibly with a mustache, they’re quickly disappearing as nowadays the third generation of Portuguese-French people is pretty much indistinguishable from the “main” French population.

I’m sure these two “stereotypes” will die out in a generation or two, as Portuguese immigrants will be more and more “diluted” into the general population, just like the Italians were before them.

And nowadays, the only time you can tell if someone walking down the street is of Portuguese descent is during the World Cup or the Euro Cup as they’ll wear a Portugal jersey or have a Portugal flag at their window. 😉

(sources for the pictures : wikimedia)

Note: I originally wrote this post in 2011. I’m republishing it in the wake of the victory of Portugal over France during the Euro Cup 2016. That is the reason why there is no reference to that game… That and the fact that I currently live in Japan, and I didn’t see a single game of the championship. Not even yesterday’s finale. Similarly, the accuracy of playing style of a few national soccer teams mentioned in the text may be outdated.

7 thoughts on “What do French people think of Portugal & Portuguese people?”