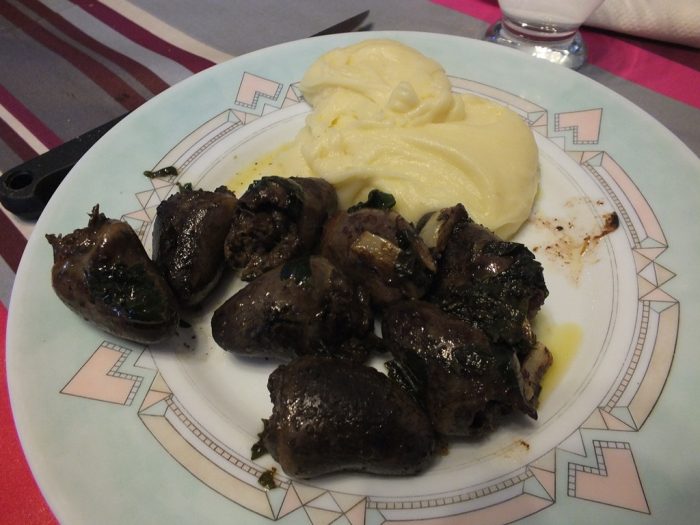 Duck hearts and Aligot were my lunch today !

Yes, if in my previous post, I wasn’t too sure what to show you from my hometown, as it’s not exactly “special”, one thing I know will interest some of you is what is in my plate during my stay in France. Indeed, one thing that many foreigners visiting France never get to experience is real French food and cuisine. By that I mean food that goes beyond the usual stuff you’ll find in most restaurants (especially restaurants that cater to foreign tourists), I mean French food and dishes that you’ll eat only if you have a French mom.

So, for the next ten days or so, I’ll show you what was in my plate. Today, it was duck hearts and aligot, two of my favorite dishes (yes, as my time at home will be short, I requested some specific dishes to my mom, my very favorite ones).

I’m sure duck hearts will gross out many of you, but honestly, innards are often the best part of an animal, and it saddens me that they are thrown away in some (culinary challenged) cultures. As I can’t cook I won’t give you recipes, but know that they are sautéed and that oil, garlic and parsley in involved.

I really advise you to try both of those dishes when you’re in France. Not sure if you’ll find duck hearts in restaurants but if you’re staying in a place where you can cook, they’re easy to find in open air markets and even in grocery stores sometimes (chicken hearts are more common and almost as delicious). Aligot is easily found in Southern Massif Central, you can also find it in Auvergnat restaurants that are pretty common in Paris. 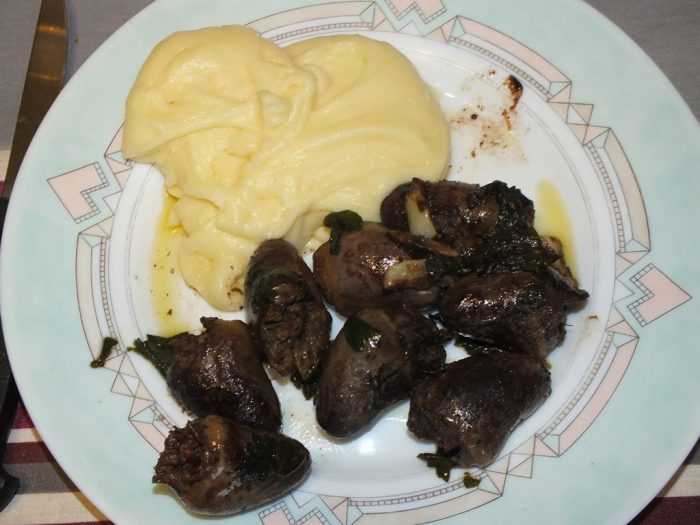 OK, I gotta go, and help prepare tonight’s dinner that is hugely important as it is Christmas eve’s dinner, usually the most important dinner of the year.

2 thoughts on “Duck Hearts and Aligot”