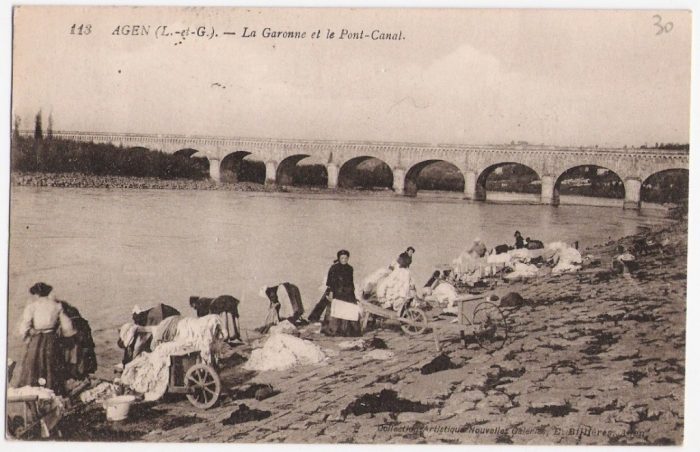 This was the Garonne River banks in Agen, circa 1900. The picture was approximately taken in the same spot as the first picture of the previous post.

I have a small story to tell you in order to explain this old postcard.

It starts in 1885. This is the year when my grandfather was born. If you do the math, he would have been 88 years old had he been alive when I was born. For some unknown (to me) reason he married late in his life and he already was 55 when my father was born. He died in 1957 when my father was a teenager. Therefore, as you can imagine I grew up not knowing much about him, and the little I knew pertained to his later years.

Fast forward to the 1990’s, I can’t remember the exact year, I just remember that I’m in college, we’re in the Spring, and it’s a four-day week-end. As it often was the case at the time, I tended to return home during long week-ends (I was in school in Toulouse then, only an hour away from home) the main reason being that as my group of friends was spread over a few cities, those types of week-end always were a great opportunity to get together.

One phone call. Two phone calls. Three phone calls. Ten phone calls? I can’t remember how many friends I tried to call that Friday evening but I couldn’t reach anybody, apparently none of them had returned home that week-end. Remember that we’re talking about a time when cell phones didn’t exist and the Internet was just something I had vaguely heard about, so getting together with friends required a different type of planning and contacting than it does nowadays.
Oh and my parents were gone for the week-end too.

In other words, I was going to spend four days alone.

After watching five or six movies I seriously started to have enough (I love cinema but not to the point of spending four days watching films non-stop), and boredom was seriously threatening to creep in. I really was not sure how to spend the remaining three days.

I hear some of you suggesting reading. Good idea, really. But see, at the time I was a literature major, and as such, I used to spend my weeks reading, and while I loved and still love reading, back then, I’d rather spend my week-ends doing something different from what I did daily the rest of the week.

So, for some reason I started to rummage through random stuff in the house, and I quickly noticed this old box that had been sitting on top of those shelves for a couple of years now, although I had never really paid attention to it nor cared about its content.

I grabbed it, opened it, and it contained several hundred postcards (about 500). Not just any postcards but postcards dating from between 1900 and 1925 for the vast majority of them. Those were my grandfather’s correspondence from back then, covering his youth, and especially the World War One period, although he wasn’t drafted for a reason I ignore (I think he had health issues at the time from what I could gather).

I started reading one postcard, two, three and I ended up reading all of them, spending the entire week-end in the first decades of the 20th Century, learning a lot about my grandfather’s youth, but more generally about everyday life in a French village at that time. It ended up being of the best week-ends of my life.

One day, maybe, the content of those stories will make it online. I had started to do it in French a few years ago, you can check it out there, but as it required more time than I could afford, I never finished. I hope I’ll be able to someday as well as translate everything in English. Maybe when I’m retired.

Why am I telling you this story?

Well, because on top of current views of France, I intend on sharing as many of those old postcards as possible here. I think that you may find this interesting, to see how France changed (or didn’t) in a Century.
I hope you’ll enjoy them.