Why Basque and Catalan separatism is much weaker in France than in neighbouring Spain (or at least why it appears to be so). I know that in Spain the Basque and Catalan regions constantly clamour for independence, yet French Basques/Catalans seem happy to be part of France (there certainly seems to be no French equivalent to ETA, for example). Do you have any idea why this is the case?

Thanks for this question John, it’s a very interesting one.

However, I’m not sure I know the answer.

Let’s try to find one anyway.

I think the main reason is historical or even more so “political”.

Both the French parts of the Basque Country and of Catalonia were integrated into France in the 17th Century (1620 for the Basque country, 1659 for Catalonia). Why were they separated from their Spanish counterparts? Oh, the usual: wars and their subsequent peace treaties dividing lands to the various parties involved.

If you know French history a little, you’ll know that France’s borders haven’t really changed much since the 17th Century, especially not in that part of France (the southern border along the Pyrénées mountains). You also may know that France is a heavily centralized country, and that also started in the same Century, during the reign of Louis XIV (1643-1715).

In other terms, The French parts of the Basque Country and of Catalonia have been separated from their Spanish counterparts for respectively 393 and 354 years. So while they still share a lot of the same culture from one side of the border to the other, it’s been long enough that most of the population on the French and the Spanish side don’t feel like they’re from the same country. In other words, most French Catalans and Basques feel that they’re both French and Catalan or Basque at the same time, that both are not mutually exclusive.

On the other hand, while I don’t know the history of Spain in the details, the country doesn’t seem as unified as France (it was once part of the Holy Roman Empire, it was at other times divided into several smaller kingdoms, etc), and the past two Centuries had their share of major changes (a couple of civil wars, two republics, a dictatorship, etc), the latest one (not counting joining the EU) being the end of the Franco regime and the return of the monarchy in 1975.

Since that date, Spain has become a democracy again, but a very different one from what France is as regions are extremely prominent in the makeup of the country. I don’t want to say anything stupid (I really don’t know the political institutions of Spain that well), but it’s almost as if it’s some sort of federal state, where regions have as much power as the central government. Because of that (and in reaction to the Franco regime which was one of the only times Spain was a centralized country) regional identity is very strong in Spain. Most Catalan and Basque people I’ve met feel that they’re Catalan or Basque before being Spaniards. So it is understandable that both regions have strong (albeit very different) independentist movements.

France just doesn’t have that history.

That being said, there are indeed a few independentists in both regions in France, but they’re a small minority and they don’t have any real impact on the local politics.

To give you an idea of scale, here are a few maps (some were photoshopped by me and my skills are pretty poor, so please excuse the non-professional look):

This is the Basque Country map. The green part is the French part, the grey one, the Spanish part. 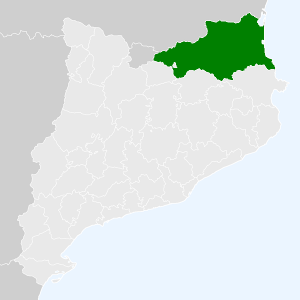 And this is Catalonia. Once again, in green, the French part and in light grey, the Spanish part.

In both cases, you can clearly see that the French parts are very small compared to their Spanish counterparts, and I believe that this may be another factor as to why Basque and Catalan identity is much stronger in Spain than it is in France. It’s even more clear in the following maps:

There too, you can see that both Catalonia and the Basque Country represent a somewhat large chunk of Spain, whereas, in France, they’re very small compared to the rest of the country.

Finally, from a population perspective:

As you see, the situations in France and the situations in Spain are not really comparable, and I believe all of those factors are the reason why separatism is pretty much negligible in French Catalonia and Basque Country.

That being said, if the Spanish Basque Country or Catalonia were ever to become independent one day, you can bet that the status of their French counterpart may become a hot topic and a serious issue.

So that’s all for today, I hope I answered your question.

If anyone knows the situation better than me, please feel free to give your two cents in the comments (and as the topic is somewhat controversial here and there, comments that are a bit too “vindictive” won’t be published, just so you know).

17 thoughts on “Why is Basque and Catalan separatism much weaker in France than in neighboring Spain?”